"Dark Ages," #1 is a Dull Start to a Promising Mini-Series 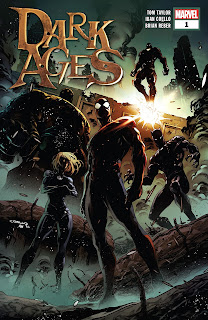 You ever read the initial chapter of a book, watch the debut episode of a television show, or read the first issue of a comic and see how it has a lot of potential but just starts out kind of shaky/weak? That's how I felt with, "Dark Ages." The whole first issue basically sets up the plot that's been advertised of a Marvel Universe that lacks any electrical power. This issue introduces a new big-bad named the Unmaker, promptly has them defeated (maybe to return), and discusses how due to that defeat the Marvel U was hit by an unending EMP that shut off any and all electricity and devices that relied upon electric power. I guess I should say, "Spoiler alert," but this whole series was advertised as being about that, so I ain't spoiling much.

"Dark Ages," starts off in a near-present-day-but-a-few-years-ahead-maybe Marvel Universe with some tweaks in the form of Peter Parker and Mary Jane having a toddler named May, and the Fantastic Four's daughter Valeria is clearly a bit older too. As this is an alternate universe some characters die quickly to prove just how high the stakes are (a common trope). Thanks to some, "shocking," sacrifices, the Unmaker is defeated and we jump ahead 7 years to the actual start of the story, where the remnants of humanity are apparently at war with Apocalypse (the well-known mutant baddie). With that, the comic ends right as things get going.

Did I expect too much as Tom Taylor is writing this and he is a fantastic writer of comics--especially alternate-universe tales as his work on the, "Injustice," comic shows? I mean, the artist, Iban Coello, does a fantastic job with all of this so no blame lies at his feet for me being bored. His Unmaker is a massive and imposing machine full of disturbing green energy and sharp edges. His drawings of various parts of the World nearly getting destroyed by the Unmaker are kinetic and scary. All the various heroes look like their popular selves. "Dark Ages," is a pretty comic, in other words. The story just doesn't grab me or seem especially interesting until right as the issue stops, however.

There is a promising foundation put in place by this first issue, so I think as this mini-series continues things are bound to get a lot more intriguing. As it is now though, this is a weak kick-off to what I hope grows into something much cooler. At least the whole thing is going to look good with Coello on the artwork duties.