Those, "On Sale Wednesday Variants," Were Really Ugly 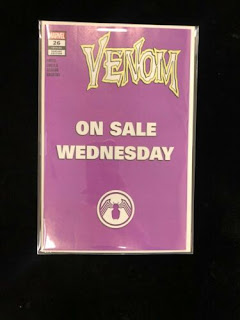 This started out as a fleeting thought, but it kept coming back. It wouldn't stop bugging me so I'm putting it out into the internet with my blog. Those, "On Sale Wednesday Variants," that came out this week from Marvel were truly ugly. Just hideous.

For those who don't know what I'm talking about, here is the strange tale: DC of course now has different distributors and allows their comics to be sold on Tuesday. Marvel is still with Diamond, which has comics go on sale Wednesday. To commemorate this random fact, Marvel announced special, "On Sale Wednesday," variants to...I dunno, be petty? In an initial preview they featured one big blob of color and text declaring, "On Sale Wednesday." People assumed these ugly images were placeholder art for the actual special variants. They were wrong. 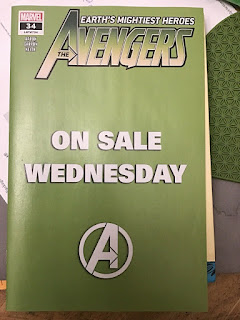 Despite rumors that these, "On Sale Wednesday Variants," would feature unique cover art or be, "Virgin," variants of the issues they were solicited for, they were actually just really covers, nothing more. The whole thing is dumb, ugly, and (as I said), petty. In the ultimate weird twist, some are still trending for above cover-price on eBay, meaning there are people who actually want to own these. The whole thing is bizarre and a waste in my opinion, however.
Posted by David Charles Bitterbaum at 3:15 PM