Flashback Friday: Magneto: Not a Hero 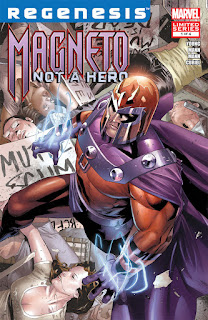 You ever have a comic series or mini-series you really liked that everyone else seems to forget even existed? That is me with the four-issue mini, "Magneto: Not a Hero," from 2012. I don't know why it is basically unknown as it is quite well-written and has gorgeous art. Skottie Young--who is normally known more for his drawing--wrote it and Clay Mann provided some stellar illustration that really imparted how powerful Magneto could be when he let his power loose in some wild fight scenes. Plus, the series brought-back a long-forgotten plot point that was kind of a big hole in continuity (for you continuity-obsessives). Seriously, why is this forgotten?

The plot, as it were, features it looking like Magneto is committing anti-human terrorist acts, which kind of sounds like what Magneto would do even if he claims he's currently trying to be peaceful for the sake of the X-Men (this happened during one of the times he had joined up with a team of X-Men). It is revealed his long-forgotten clone, Joseph, who was thought to have maybe died previously but it was never conclusively proven, is to blame. This results in Magneto and Joseph (along with some other mutant clones Joseph has made) brawling, Magneto working to clear his name while learning Joseph is working with some nefarious groups, and again, it looks really good because Mann is a skilled artist who now does bigger-name books because he's gained acclaim. 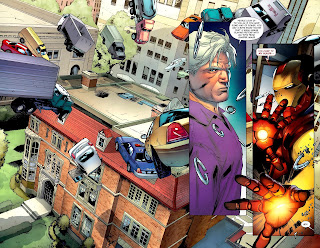 "Magneto: Not a Hero," is a footnote of a mini-series that seems to only ever be thought of nowadays by Magneto completists. That's a shame as this is a fantastic bit of issues that really say a lot about Magneto, his views on mutants and humans, and fills-in some story gaps with a random character in the form of Joseph too. It is truly worth seeking out the individual issues (you can probably find them in dollar bins) or buying the trade paperback collection to give a read.
Posted by David Charles Bitterbaum at 8:31 AM