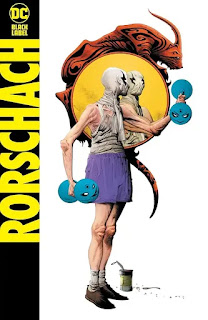 Tom King is a skilled writer, great guy, and my friend on Facebook. That said, I'm not beyond pointing-out when my friends make a mistake. Tom King made a mistake and got some egg on his face for it. Basically, he has that, "Rorschach," comic coming out and skilled illustrator Jae Lee was hired by DC to do a snazzy variant cover for it. Tom King expressed his displeasure about this on Twitter because he knew Jae Lee had done some covers for people associated with Comicsgate and was therefore assumed to be sympathetic to that group (despite the fact Jae Lee is Korean and Comicsgate is pretty alt-right & lilly-white). Tom King publically called-out Jae Lee for being with a hate group, and this would be fine...except Jae Lee had never even heard of Comicsgate.

Jae Lee doesn't have Twitter. He apparently is not even on the internet that much and I read (then confirmed) he actually still has an @aol.com email, that is how little he does with tech. The man is an amazing artist but is not really plugged-in to the digital World in the same way many of us are. He would sometimes get emails from people asking him to draw them a cover and he figured it was a gig, so he drew what they asked. If it happened to be a dumbass cybernetic frog created by the monstrous Ethan Van Sciver, Jae Lee had no clue it was related to a hate group, somebody just paid him to draw a stupid frog for a comic that seems like it'll never be coming out anyways (keep scamming your followers, Ethan, they don't seem to mind). Those of us who use social media hear about these things, but if you're relatively disconnected from it all as Jae Lee is, it is understandable you'd be surprised to hear someone was calling you out on a social media platform you don't even use for supporting a hate group you had no idea existed.
Tom King later tweeted out he had spoken to Jae Lee, Lee did not support hate in any way, and it was, "The best possible outcome." I kind of disagree with that last statement. If King were upset about someone he thought represented Comicsgate had involvement in his works he could have first privately reached-out to DC, or even Lee so he could have been told Lee had zero involvement with the organization beyond drawing some covers before he knew they were a marginalized hate group. Then this would have not blown-up all big and threatened to make Jae Lee look really bad when he's just a nice guy and fantastic artist who avoids social media and its scandals. I just hope King at least apologized to Lee for this as it was so awkward to witness.
Posted by David Charles Bitterbaum at 12:16 PM