I'm Annoyed How Limited This Black Lightning Funko Pop Will Be 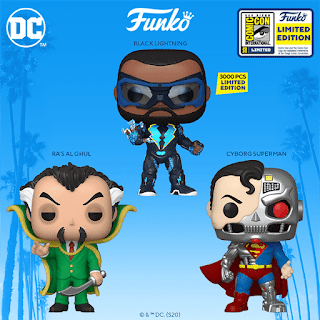 I still collect Funko Pops of my favorite characters/shows/etc. despite having cooled a bit on the hobby due to it feeling oversaturated with new releases constantly spilling-out. That said, when Funko announced a Black Lightning Funko Pop to be released as a part of their virtual convention (what with Comic-Con International/San Diego Comic-Con canceled) I was excited! Then I saw it was limited to 3,000 figures. Come on, Funko.

Funko doesn't do limited runs as much now, and when they do it is generally a variant of a Pop (like its chrome, glow-in-the-dark, and so forth). This is not the case with Black Lightning. It is just the really cool Pop, limited to 3,000. If there were a SDCC it would have been exclusive to the show, methinks, but as everything is going to be online there is maybe a sliver of a chance people can buy it for retail. I know I'm going to try as I'm a fan of the character in the comics as well as loving the television show. Here's hoping it all goes well! Should I manage to get one, I might just see if friend of the blog and creator of Black Lightning, Tony Isabella, would be willing to sign it for me--now that'd be cool!
Posted by David Charles Bitterbaum at 1:29 PM