A Small Helping of Links for Late July of 2020

We are nearing the end of July. It's hot, it's wet, and what August could hold in terms of schools, the economy, and everything else is a big question mark. Let's try to relax with some links and news. Not as much as sometimes when I do these posts, but it's all about quality over quantity, right? 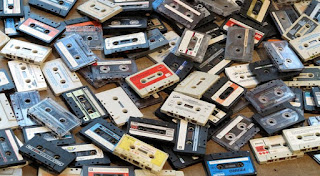 I've mentioned off-and-on here how I'm on a bit of an old-tech kick. As a part of that I've enjoyed listening to cassette tapes lately, and apparently, I'm not the only one. It seems cassette sales have more than doubled in 2020. Doubled from a tiny amount, yes, but still have doubled!

I've enjoyed everything that's been a part of the, "All Time Comics," line of off-kilter hero comics. Hence, when Paul Tumey of The Comics Journal did a deep-dive into their works I gave it an eager read.

Speaking of heroes and comics, JM Mutore of Polygon examined how comic-books and their related media tie-ins could examine the issues of superheroes and their, "Policing," of others as our real-World police face further scrutiny at this time.

The Eisner Awards happened recently, with a lot of questions surrounding discrepancies in the voting process. This, unfortunately, tainted things somewhat, but I hope the winners are pleased and congratulate them all!

The, "Sonic the Hedgehog," movie was surprisingly good and did quite well at the box-office. That made a sequel a sure thing, even if an exact date was unclear. Well, it seems we'll be getting another Sonic movie in April...of 2022. Whether the time needed for all the effects is the cause of the delay or COVID-19 is unclear, but it will be awhile.

On the subject of movies, let's close with an AV Club segment where they look at big blockbusters--it had its most recent segment feature Tom Breihan discussing, "Terminator 2." It nails a lot of points, from what worked (its amazing special effects) to what didn't (the kid sidekick gets annoying). I personally think the first movie with its low-budget grime and horror-flick aesthetic is still the best, though. I also will defend, "Salvation," as not that bad too, however, so what do I know?

That's All for Today

I hope you enjoyed this reasonably-sized portion of links and news. Stay cool and stay positive out there.
Posted by David Charles Bitterbaum at 12:17 PM