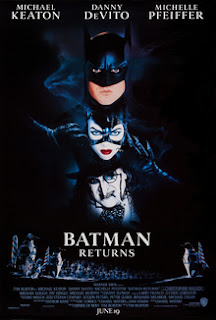 I'm going to just say it. "Batman Returns," is the best Batman movie. Now, "The Dark Knight," is the best Joker movie thanks to Heath Ledger's incredible performance, but I love, "Batman Returns." The first Batman movie, 1989's purely titled, "Batman," is fantastic with Michael Keaton as Bruce Wayne/Batman and Jack Nicholson as the Joker, but I still love the sequel more. Keaton seems even more at home in the role, Danny DeVito kills it as the Penguin, Christopher Walken is a delightfully sleazy Max Shreck, and Michelle Pfeiffer is tied for best Catwoman ever with Eartha Kitt.

The cast is amazing, the plot is clever with its election tale of The Penguin being a monster but creating a positive public image to try and gain a position of power (always relevant), and the imagery is a crazy as you'd expect with Tim Burton directing (he directed the debut, "Batman," as well and just as with Keaton seems more at home in the sequel). From seeing it as a youngster to revisiting it as an adult today, "Batman Returns," is a cinematic delight and my favorite Batman movie when it comes to Batman--again, "The Dark Knight," wins when it comes to the best movie with a Joker involved. 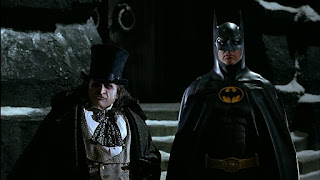 Currently, rumors abound about Keaton returning as Batman for future DC movies. I'm quite eager for such a thing to occur if it turns out to be true as whenever I picture Batman, the person I see is Michael Keaton. I hear Kevin Conroy's voice coming out of his mouth, oddly enough (all those years of the cartoon), but I see Keaton. The reason for that is, "Batman Returns," the best Batman movie.
Posted by David Charles Bitterbaum at 12:49 PM