I've Been Selling Almost All My Warren Ellis-Written Stuff 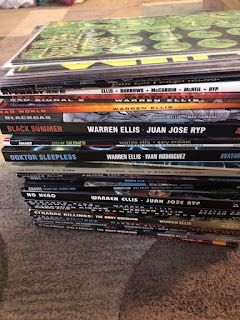 It started out as his name being mentioned as someone who was rumored to be preying upon women and engaging in sexual coercion. Then more and more women and female-presenting non-binary individuals came forth. Now there is a website, "So Many of Us," that has over 60 shared occurrences of, "...people who have been targeted and manipulated by Warren Ellis, author." It makes me feel sick to think Ellis engaged in this pattern of behavior for years--and even after issuing a weak, "Apology," recently kept acting in such a manner.

I was and in a way still am a huge fan of Warren Ellis. That said, as more and more has come out showing his treatment of a number of women and female-presenting individuals I have come to a conclusion. I personally do not feel like I want to own many of the hardcovers, trades, written works, and some floppies I have that were written by Ellis. I'm not here to debate his behavior (so don't bother excusing him) and have zero issues with anyone wanting to own his works. I just personally do not want to anymore and thought I would sell most of the things I own by him. I will be keeping my issues of his run on, "Moon Knight," because I am a completist when it comes to the character. I will not, however, be displaying those issues proudly anymore, instead hiding them away in a shortbox with my less-notable issues.

The rest is that big ol' stack pictured which I've been working at selling in online groups and selling websites. None of it is especially valuable, maybe worth $4 a trade and $8 a hardcover. I won't make a ton selling it, but I just feel like I don't want to have it anymore. When I look at his works I no longer am reminded of how much I enjoyed them, just what it is now out in the open Ellis has done to so many lives. There is no way to undo how much Ellis' work meant to me; I honestly don't want to forget how his works impacted me. I myself, and simply myself, just don't want to own his creations anymore.
Posted by David Charles Bitterbaum at 10:48 AM

Email ThisBlogThis!Share to TwitterShare to FacebookShare to Pinterest
Labels: books, comics, Moon Knight, news, Sexuality, So Many of Us, Warren Ellis