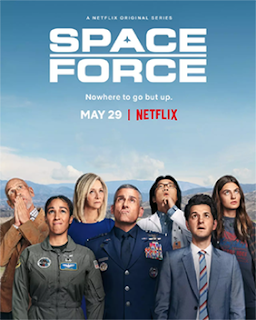 Ah, "Space Force." The show loosely based on some quite dumb real-World event. Yes, it was savaged by critics, but lots of people seemed to watch it (as far as we know, Netflix is always cagey about viewership) and my wife and I gave the 10 episodes a shot too. We actually quite liked it, so I guess we're different than a big chunk of reviewers! Yes, it starts off a little slow but by the 3rd episode, it really gets rolling and continues to entertain. The cast is solid with Steve Carrell, Lisa Kudrow, John Malkovich, and plenty of other comedic folks who get smaller but hilarious roles involved. The show never makes the military look stupid but refuses to fawn over it as well.

Basically, "Space Force," is about a bunch of people who mean well but can't seem to agree easily. Be they the 4 star General played by Carrell butting-heads with Malkovich's civilian scientist, or the countless other individuals struggling to make this new military branch work as a talked-about but never named or seen (beyond some texts) President who is just called, "POTUS," or, "The President," wreaks havoc here-and-there.

It is clever this show doesn't outright mention or reckon with Donald Trump, as that would in some ways immediately date it. By having the President just be this unseen force of chaos it could be any fictional President causing trouble, just as easily as Donald Trump making a mess. "Space Force," and its ensemble of characters all balance each other out pretty well and the 30-ish minute episodes go by at a snappy pace, rarely feeling too long or overly decompressed as some Netflix shows are known to struggle with (the infamous and oft-discussed Netflix bloat).

Generally, each episode introduces a challenge for the cast of, "Space Force," they handle it as well as they can, and some subplots keep simmering in the background until the end of season 1 where we get a bunch of cliffhangers. It is a formula, yes, but it works and results in a fun show. I'm not sure exactly why the critics were so savage towards, "Space Force," and my friends all seemed to either absolutely love it or hate it. Samii and I thought it was pretty darn entertaining and we look forward to a presumed second season.
4 out of 5 stars.
Posted by David Charles Bitterbaum at 11:20 AM