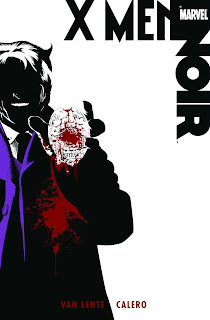 Some years ago Marvel had the idea to retell the stories of their most popular characters in a noir style. The only breakout hit from that ended up being the Spider-Man one thanks to his appearance in various other media forms (games and the animate movie). For my money, however, "X-Men Noir," was the best and most creative. It told the story of a man named Tommy Holloway investigating a group of sociopathic teens who were mentored by the discredited psychiatrist Charles Xavier whilst also facing off with a criminal Brotherhood (kinda like the Brotherhood of Mutants) that exercises a lot of influence on a Police Force run by Eric Magnus. A lot is going on.

Lots of interesting interpretations of famous characters from the X-Men appear, but Tommy Holloway is the main character and not an X-Man, he wants to be a super-hero, saying he feels like he's what, "Comes next." This gives the comic a nice meta-feel, commenting on how noir and pulp works eventually led into superheroes. Tommy goes by Angel (unrelated to the X-Men one) and in a further meta twist was one of the earliest comic-book superheroes at Timely comics before it became Marvel. The mixture of a strong story overall mixed with all the clever meta-elements gives this noir take on the X-Men quite a delicious twist. There was a sequel mini-series, "The Mark of Cain," but for my money, the original mini-series is perfect by itself.
Posted by David Charles Bitterbaum at 6:33 PM