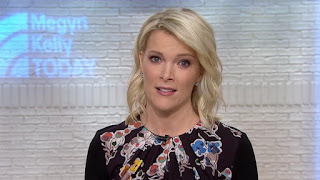 In, "Oh yeah, that still exists," news, there is the toxic 3rd hour of the, "Today Show," I continue to avoid like the plague thanks to its insistence that Megyn Kelly somehow is a worthwhile person to have host a pseudo-daytime talk-show (it still sucks). Kelly continues to host it and during the brief times I've forgotten to turn to the channel to the much-better and quite fun, "Great Day Saint Louis," that runs at the same time I've just loved seeing Kelly try to hide the fact that even if she's on NBC now she's still deeply Fox News in her actual views (like apparently women want to be fat-shamed, or, "The wrong kind of people," shouldn't be allowed in Starbucks' bathrooms). For the latest example, Kelly said how she didn't think Blackface was a big deal for Halloween and had to promptly apologize not too long after saying this when it was pointed out how that is some ignorant B.S. she's spouting. As I've posted about before, Blackface has a uniquely painful and racist history within the United States that makes it mean a lot more than Kelly seems to think it does.

Megyn Kelly continues to harm the, "Today Show," image as a mixture of news and fun delivered by objective and likeable hosts. She isn't objective, fun, likeable, and her shows seems unsure if it wants to be a soft-news program or tackle hard issues. It isn't really surprising she is shunted off to her own hour (usually) by herself as host, as it seems it is difficult to have anyone to even want to work with her. I look forward to when Kelly's time hosting the 3rd hour finally ends and something better replaces it (although I may have to watch it on DVR as, "Great Day Saint Louis," has really grown on me). Then, when someone sits down and writes a big history of the, "Today Show," over the decades I'm sure both her time on the show and the whole Matt Lauer fiasco will probably be some of the darkest moments in the program's history. She's about to come on here at 9AM central time and I'm sure she will have some half-baked apology today. I won't bother watching it.

Posted by David Charles Bitterbaum at 8:53 AM