Stuff from NYCC 2018 I Found Noteworthy

The Day After the Con
It is the Monday after New York Comic-Con. It also is Columbus' Day, but fuck him, I'm calling it Indigenous People's Day because there were people here before he, "Discovered," America in 1492. Anyways, NYCC 2018 had a variety of things that occurred or were announced. I by no means have a detailed list of all of them, just the things that I felt were noteworthy enough to discuss or I at least had a snarky comment to share about. Shall we? 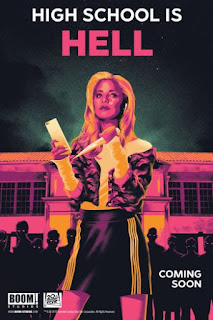 I really feel bad for Dark Horse. They lost the, "Star Wars," license shortly after Disney bought Marvel, they also had, "Conan the Barbarian," snatched-up by Marvel, and now they don't even have Buffy, with BOOM! getting the rights and planning to reboot the series for the modern day. I enjoy the stuff that comes out of BOOM! and am sure it'll be great with a creative team including the stellar Jordie Bellaire, but ouch.

Speaking of Conan and Marvel, apparently he will be getting a second ongoing comic from the publisher. Oh, and the, "Avengers," book is going to be weekly again. That is seriously the only thing regarding Marvel I found interesting--I think some other stuff was announced like a, "Cloak and Dagger," digital series, but I don't even care enough to look for a link. Okay fine, here, don't say I never gave you anything.

Lobo is going to be appearing on the second season of the television show, "Krypton." Also, apparently, "Krypton," had a first season? 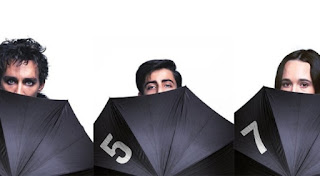 I said above how I felt bad for Dark Horse, but things are still going relatively okay for them. They've got that, "Umbrella Academy," show coming to Netflix based on the beloved comic and the newest cinematic version of, "Hellboy," is getting some positive early buzz.

That DC streaming service is chugging along, with some talented folk involved in their, "Doom Patrol," show that I quite like, such as Brendan Fraser along with Matt Bomer. Also, their animated Harley Quinn show will star that Kaley Cuoco lady from, “The Big Bang,” theory show as Harley's voice. In case you aren't sure what, "The Big Bang," theory is, its that show that seems to always be on in the background at your relative's house. Oh, and it isn't coming-out on the streaming service until well after its theatrical run, but  DC released a whole five minutes of new footage from the upcoming, “Aquaman,” film, which I think means they are relatively confident to give people that big of a, “Taste,” of the flick.

Image had a great show, with plenty of goodies for sale, creator signings, and a panel about horror in comics that sounds like it was a treat for all in attendance. 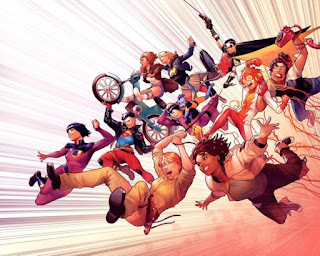 Brian Michael Bendis will be continuing his many, many tasks at DC with the launch of yet another imprint from the company, "Wonder Comics." As this line isn't geared specifically toward mature readers the odds of us getting to see Batman's wang again are sadly quite minimal.

European publisher Humanoids had been gathering an assortment of talented creators for awhile in regards to some kind of unannounced project, with the exact reason just as unclear. At NYCC they declared they are actually going to be doing their own unique super-hero universe. I wish them luck, as it is possible, but surely going to be hard to do in a market already full of this content. At least, as I said, they've got some great creators on-board.

Lastly, here is something not at all shocking, we will be getting another war comic from writer Garth Ennis. It will probably be very well-written as most things by Ennis are, I just find it interesting how much this guy loves to make war comics.


That Does it for Now
That's everything from NYCC 2018 I can recall as being worth posting about. There may have been something else, but if I can't recall it right now perhaps that illustrates how actually interesting it was. I'd love to get out to NYCC someday and visit the vendor booths, artist alley, and perhaps take in a panel where stuff like the above news gets announced, but for now I'm content to just read about what occurred.
Posted by David Charles Bitterbaum at 1:16 PM