Today the Senate was able to pass a vote to appoint Brett Kavanaugh to the Supreme Court. This is an embarrassment for many reasons. There was of course a lot of press about how Kavanuagh behaved back during his high school and college years, allegedly being a heavy-drinker and possibly even committing a variety of sexual assaults. Depending on whom you ask, Kavanaugh didn't do anything too terrible and was just a kid having fun, or did indeed drink way too much and maybe even raped women.

A female friend of mine who disclosed to me that when she was young she was sexually assaulted and  would readily share she hates Kavanaugh as a person also pointed out to me that when folk are in high school or college they have a lot of growing-up and development to do. This makes it hard to judge their actions decades later as long as they didn't do anything too heinous. This made me think for sure and even putting aside the question of how he acted in the past, his behavior in the present has clearly shown him unfit to be a judge, with the only reason he was able to be successfully appointed today arguably stemming from an equal mixture of male privilege and white privilege. 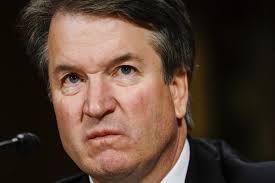 Brett Kavanaugh at the Senate hearings lied about what various things he had written meant, instead of owning-up to using foul and sexual language he claimed other meanings. He yelled, blamed Democrats and others as being against him, and otherwise showed he was not impartial. If a woman had acted the way he did people would have decried her being, "Too emotional," to be a judge. He got the benefit of the doubt however, as he is a man...well, a white man. Were Kavanaugh a black man people would have believed the women coming forward saying he raped them, because even a black teenager or pre-teen doesn't get the same leeway as a collegiate white male. Just look at the past and present for examples of how a black man even being suspected of whistling at a white woman or simply being out and about in public while black can get the police called and have them arrested or killed. A black man who was a, "Loud drunk," wouldn't get away with what Kavanaugh wrote about with his friends.

Brett Kavanaugh shouldn't be a Supreme Court Justice, it is an atrocity. As with so much of the Donald Trump Presidency however, terrible things keep getting forced through by the President and a Republican party willing to look the other way regarding how awful he is as long as their agenda gets to be followed and make America worse. I'm disgusted, simply disgusted.
Posted by David Charles Bitterbaum at 10:26 PM