"XTC69," By Jessica Campbell is Hilarious and Insightful 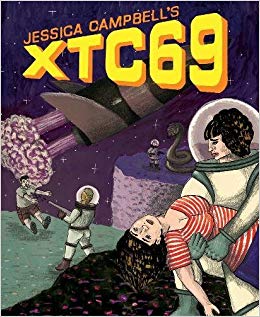 "XTC69," is a short graphic novel written and illustrated by creator Jessica Campbell and published by Koyama Press. It chronicles a group of three female space-adventurers who are searching for men to breed with ever since men quit existing for assorted social and scientific reasons--basically nobody wants to be a man in the future. Cloning has only been able to do so much and results in little genetic variation, so the adventurers have been searching the cosmos.

The astronauts land on Earth and find frozen in a hibernation chamber none other than Jessica Campbell herself, who volunteered to be frozen for a medical experiment that was supposed to be relatively brief and make her 50 bucks--she was warned she could be forgotten and not thawed-out until 700 years after all human life on Earth has died however, which is what in fact occurred. Campbell leaves with the adventurers (one who funnily enough shares her name through a wacky coincidence) and a planet with men is in fact discovered. Things do not go well, with the planet that is entirely guys being full of misogynistic jerks who basically remind the women why men essentially went extinct in the first place. 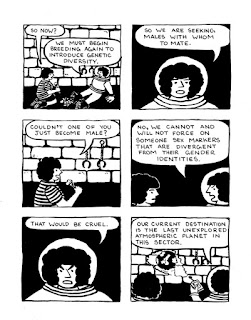 A lot of mayhem occurs, but there is a happy ending, with it seeming Campbell might very well end up having a relationship with the space explorer who shares her name (a lot to unpack there in terms of how potentially narcissistic that is and the joke Campbell is telling about it by inserting a version of herself into the story in the first place) and a funny end-bit strip where when Campbell is asked if her comic might be taken as anti-man she responds how she doesn't think it will be, plus, "Some of my best friends are men," a clever little swipe at people who claim to not be sexist or racist thanks to their friendships with others. Campbell's comic is quite quirky and her art-style is perfect for the book, making the futuristic space-ships and planet of men perfectly over-the-top but then drawing everyday objects like Campbell's abandoned house with a nice familiar and homey feel.

Campbell's stellar artwork and fantastic wit results in a book I loved reading, with its feminist message carrying all the more strength in today's strongly anti-woman political climate. I rate it 5 out of 5 stars. You can request your library order a copy or buy yourself one on Amazon, at other bookstores, or via a quality comic-book retailer, which is how I ordered and purchased it.
Posted by David Charles Bitterbaum at 3:38 PM