I Really Like That, "Drew Barrymore," Song by Bryce Vine for Some Reason 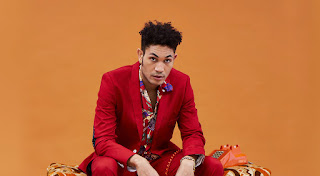 Bryce Vine is not a music artist I am particularly familiar with. He apparently was briefly on a reality show for teen-singers where they competed to be on, "Glee," titled, "The Glee Project," which I did watch years ago, but as he was the first eliminated it doesn't surprise me I have zero recollection of his time on the program. That said, hes been working for some years making singles and EPs, with one he debuted in 2017 titled, "Drew Barrymore," starting to get a lot of play now in mid-to-late 2018.

His story is interesting, going from almost giving-up at music after struggling to get signed with a label to finally finding some success, and shows how hard he has had to work to get some recognition unlike various tweens who get found by record labels thanks to their videos on YouTube and then are groomed for mass consumption with bland pop-releases (Justin Bieber, Austin Mahone, etc.). Vine has been working and has a debut album coming out in 2019 that may be titled, "Carnival." I'm interested in hearing it because I like, "Drew Barrymore," so much. What makes it as enjoyable as it is, though?

"Drew Barrymore," is basically a song about Vine finding a woman attractive and having sex with her, one of the most basic song-concepts ever. The thing is, he works in so damn many clever metaphors, uses his sing-song raps expertly, and otherwise makes the whole thing weirdly entrancing that I can't help but want to listen to the song repeatedly. He paints a surreal picture of the room they are making love in, talking about a television that doesn't work, describing her as a hurricane sweeping through a desert like a "Hot Americana rain."

It is a strangely poetic song even as it admits that it is mainly about, "Fucking on the counter or the coffee table." The mixture of concepts and Vine's deep voice reminds me a bit of another talented lyricist, Mike Ladd, and that is meant as the utmost compliment to Vine. "Drew Barrymore," is a song I can say I really like thanks to being so intriguing as well as catchy. I look forward to hopefully hearing a lot more from Vine in 2019!
Posted by David Charles Bitterbaum at 3:16 PM