Television Tuesday: The Megyn Kelly Hour of the, "The Today Show," Sucks 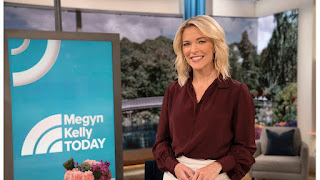 I know I've said in the past not to judge a show by its first episode or two, but dear God is the new Megyn Kelly hour of, "The Today Show," bad. I would consider myself a bit of a conissuer of, "The Today Show," having watched it as often as possible since I was a young child. Katie Couric was inspiring, I feel like Al Roker and Willie Geist are old friends, Jenna Bush-Haeger and Dylan Dreyer are a hoot, I was so sad when NBC did Anne Curry and Tamron Hall wrong, oh and, Matt Lauer is there too. The third hour of, "The Today Show," or, "Today's Take," as it was known for some time seemed like it was just a good hour of fun and news. After all the work earlier in the show the casters could sit down, kick-back their feet, and enjoy themselves. Plus, it makes a nice mellow lead-in to the general boozy-insanity of the delightful 4th hour with Katie Lee and Hoda Kotb--which thankfully have been left untouched by this Megyn Kelly nonsense.

Imagine yourself watching the blandest talk show possible and you've basically guessed what it is. A little bit of news, some interviewing people, and it is all as dull as a stale nilla wafer. While some people seem to just exude personality, Kelly seems to suck all the energy out of the room, doing her interviews as if she's just ticking-off a list of stuff to bring up and then move on to the next subject as awkwardly and nervously as possible.

The only thing on Monday that at least was bearable from a human-interest angle was the recorded piece about a nun who helps inner-city teenagers which of course is cliché but still sweet and heartwarming (I was pleased she got presents for being awesome when they brought her out). Even that has some uncomfortable overtones with this white lady going and helping all the poor black people though. That maybe wasn't the best thing to have in the first episode of a show for a woman who herself used countless dog-whistles to racists when talking about former President Barack Obama when she was a Fox News crony. Tuesday was basically just a big ad for, "This is Us," followed by a segment that was basically one big stroke-job on Kelly's ego where they interviewed her family and friends about awesome she is. Yeah.

Early reviews of the show are also not too kind, with The Washington Post describing it as a, "Bride of Frankenstein" which is made-up of various body-parts from other shows. The Atlantic mocked her stating how she's "Done with Politics," considering she spent years on Fox News doing nothing but politics before that ended in a ball of fire and she came to NBC because her station turned on her for not bowing-down to Donald Trump and speaking-out about being sexually harassed (the one, count em' one thing I admire about her, she didn't take shit from Trump or Fox News). Her nighttime news shows for NBC bombed tremendously so now she invades my beloved, "The Today Show," and ruins what used to be a great third hour. I give it six months, eight at most if NBC feels generous.
Posted by David Charles Bitterbaum at 9:46 AM