Thanks, "Stabbity Bunny," Creative Team and Comics Heating Up For the Awesome Comic! 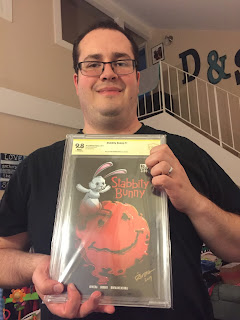 I am of course a frequent reader of Comics Heating Up, arguably the best website around for those into comic-book speculation. Not too long ago they had a contest with the creative team behind, "Stabbity Bunny," to come-up with a name and breed for a dog which would appear in the comic as a pet of the main character. "Stabbity Bunny," is an independently-published comic that was just recently picked-up by Scout Comics and looks like a hilariously dark read, focusing on how, "A seven-year-old girl and her plush rabbit, Stabbity Bunny, are targeted by supernatural forces that have been hunting her family for generations. Grace is kidnapped and things quickly turn from dangerous to deadly when she attempts to escape. Fortunately, both Grace and the kidnapper will discover Stabbity has secrets of his own … and nobody threatens his little girl." That plush rabbit clearly will defend Grace from any danger quite violently, so yeah, this should be zany fun.

As Grace will be getting a puppy and people were asked to supply a breed and name, I suggested what I personally felt would be a superb breed to have in a comic and the name I would give a dog if I had one. Therefore, I suggested she have a Pug and he be named Humphrey. I made that comment and forgot about it until some weeks later when the winner was announced via a Youtube video, and I was quite surprised to hear who won:

That's right, the creative team of Richard Rivera, Dwayne Biddix, and Liezl Buenaventura liked my suggestion enough that when they reviewed the list of names and breeds I was chosen as the winner! They were unaware I even had a blog, but as I do I wanted to give a shout-out to them expressing my thanks for the awesome comic, and of course thank Tony and the rest of CHU crew as well! I am very excited to see the debut of Humphrey in future issues of, "Stabbity Bunny," for sure!
Posted by David Charles Bitterbaum at 7:48 PM