With this second installment of The Hot Comics Revue it officially is now a semi-regular thing on my blog. I continue to owe a debt of gratitude to my chums at ComicsHeatingUp for the inspiration for this segment. They which they think might be hot before they come out, with the focus of my segment of course being discussing comics that are already released and warming-up, red-hot, or have steamy potential.

A Book That is Warming Up 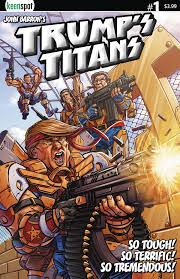 Trumps Titans #1
I have made it clear multiple times on my blog that I despise Donald Trump and horrible excuse for a President he is proving to be. That said, political stuff  in comic-books generally gets some interest and this smaller-press title, "Trump's Titans," could appeal to both fans of Trump as well as haters due to politics of course being of immense interest to many of us lately. There are a variety of covers that seem to be generating sales and they all are selling for a bit above cover price on eBay and might get ever warmer as shit just gets crazier in crazier in regards to an already absurd Presidency. 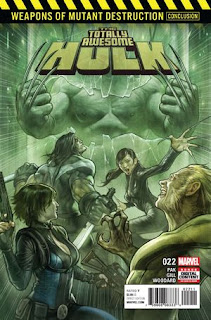 Totally Awesome Hulk #22
Part of a crossover titled, "Weapons of Mutant Destruction," this issue features the debut of the character Weapon H. Weapon H is arguably the most 1990's concept ever, a Hulk with huge Wolverine-style claws and chunks of adamantium poking out of his body in an almost Doomsday-esque manner. It is pretty silly, but I think that's kind of the point. Plus, by combining the Hulk and Wolverine into a big gray and angry monster this book has found itself steadily climbing in popularity from at first going for $15-$20 to shooting-up to nearly triple-digits and now settling nicely at around $40-$50 for a first-print copy.

As this has no variants outside of upcoming 2nd printings that helps prevent any muddying of the market. The continued value of this book relies heavily on Weapon H remaining popular and possibly showing-up in other books, or else this baby might fizzle. For now though, its on fire and unless you go to eBay your chances of getting a copy are slim. 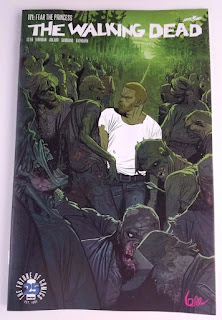 The Walking Dead #171 "Pink," Variant
Okay, so this one is a little confusing. Basically, the newest issue of, "The Walking Dead," has two covers, the usual A cover with a new character known as, "The Princess,' on it and a B cover with a bunch of zombies swarming around. However, there is a secret third cover that is kind of like an alternate B cover! Confused? It's okay, basically all you need to know is that the variant cover for this issue has a version where the artist's signature is in blueish ink and a version where the signature is in pink ink that seems to at a ratio of 1:10-1:20 depending on the store.

Now, "The Walking Dead," is already probably the most valuable of most modern comics and while other titles will heat-up and cool down if something is TWD-related it generally just keeps getting hotter and hotter. As if to mirror that this, "Secret variant," started going for easily $25-or-so on eBay before now selling for anywhere from 75 smackers to nearly a Benjamin AKA $100. I'm not sure what the roof will be on this book but once it hits that cap it will probably stay there as opposed to cooling-down because this is, "The Walking Dead," and at this point anything TWD-related is a license to print money. 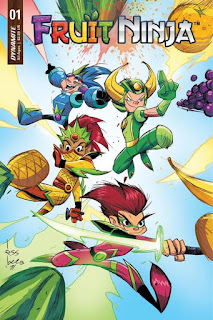 Fruit Ninja #1
Okay, bear with me here as some might disagree with me on this (ComicsHeatingUp actually said they were betting against this book getting popular) but considering how other comics based on games have been popular I could see this maybe getting hot. After all, the cross-over potential exists between fans of the game and people who like comics, plus Fruit Ninja is a popular game despite not having any plot I've ever seen which makes me curious how a comic will be designed around it. Also, there is a, "Jetpack Joyride," back-up story and I've loved playing that game before.

It might be a stretch, but with enough buzz I could see the first issue of, "Fruit Ninja," getting some attention and maybe shooting-up in value. It sounds crazy, but the "Dark Souls," comic continues to make a decent profit after it got popular, so why not Fruit Ninja? For now you can get it for what is basically cover-price on eBay, so I know I'll grab a copy and give it a shot.
Posted by David Charles Bitterbaum at 11:17 PM