Let Me Get This Straight--People Still Aren't Reading, "Deathstroke?"

Let Me Get This Straight... 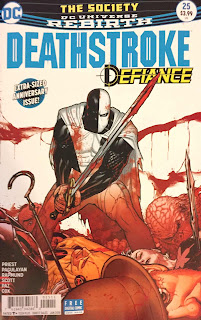 Since getting to the point I barely read any Marvel titles due to, "Legacy," being miserable I now am mostly enjoying Image, DC, and other Indie books. I of course will talk with other folk who read DC titles at various times and always hear about them picking-up the bigger-name books such as, "Batman," the Superman-titles, "Wonder Woman," and of course secondary books will get mentioned too. Far too often people seem to leave out, "Deathstroke," however and how it is arguably the best super-book coming out from DC right now, with many a person I've talked to saying, "Deathstroke? Why would I want to read a comic about him?" So, let me get this straight, there are still people out there not reading, "Deathstroke?"

The Magic/Skill of Christopher Priest 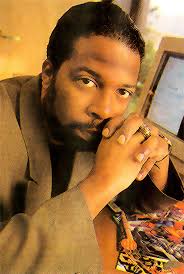 I never cared about the character of Slade Wilson AKA Deathstroke. He was a dully written villain who failed to grab my attention with his mercenary adventures. He was an assassin who was good enough to go-up against super-heroes and was often written as a bit of a Mary Sue/Gary Stu who we were encouraged to consider so badass, when in fact he came-off more like a tool. A dangerous killing machine, but also just lame. Christopher Priest is a writer who has been around decades and with his work on, "Deathstroke," since it re-launched has shown that with his magic/skilled touch even a character like Slade Wilson has potential. The fact Priest was one of my favorite writers of 2016 and, "Deathstroke," was a favorite comic that year tells you a lot, methinks.

Priest has kept Slade as a dangerous and smart killing machine, but he's also taken the time to explore what such a person must actually be like, and how miserable their life must be. Slade started the series as a villain who was great at killing people, but in the process had isolated himself from basically anyone who ever cared him and finds relating to people outside of butchering them to be a great challenge. Slade's way of showing his daughter he cares is by putting a hit out on her and then hanging-out by her side fending off would-be killers just so that she's forced to spend time with him. Priest takes Slade's unfeeling and dangerous persona and doesn't go, "Wow, isn't this cool?" but instead asks us, "Wow, isn't this sad?" I'm not alone in loving this book either, with other critics finding it insightful as well. 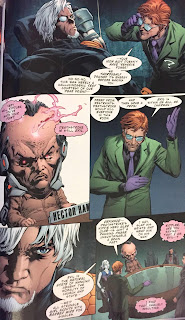 During the series so far Slade had an awakening of sorts when he stole some time-travel powers from the Flash (a younger, Wally West version) and discovered no matter how hard he tried to change the past he still just ruined things. With that revelation, Slade has been trying to be a good guy lately. this has entailed creating a super-team named, "Defiance," and stating he has renounced killing. This upset a group of fellow villains who send for him a number of issues before the extra-sized #25 which just came out and features Slade captured by them and being interrogated on if he's truly, "Gone good." A variety of bad-guys from the DC Universe such as The Riddler (serving as Slade's defense of sorts), Hector Hammond, Black Manta, and Killer Frost (who herself has been a bit heroic lately) torture and question Slade as he claims he's become someone good now. In the process just what, "Evil," is comes-up and a hallucinatory-test is conducted where Slade thinks he's been freed and proceeds to kill all the members of the group...thereby proving to them satisfactorily that he is the same as ever and all this heroism is a passing-phase.

Priest intentionally never makes it clear this issue whether Slade knew it was a test and that he wasn't really killing anyone or if Slade in fact would have reverted to his old form and violently murdered his captors. We as the reader are left to wonder how much Slade has really changed and how much is him just thinking he's different. These 25 issues (plus a few extra taking into account a cross-over) have been amazing and shown me--someone who didn't know much at all about Deathstroke before this series--that with a skilled writer even a character who seems hopelessly lame can become a stellar focal point of a fascinating book. 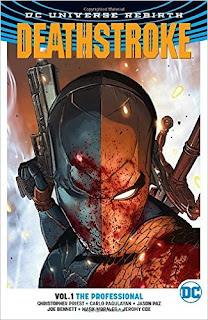 Seriously people, you don't have to know much of anything about Deathstroke (I didn't) or even the DC Universe to be able to read and greatly enjoy these books. You just have to love great writing and philosophy with a good dash of action thrown-in too. I know this book isn't super-unpopular or at risk of getting cancelled (at least, I hope not), but I feel like many, many more people should be checking this out and loving it as much as I do. You can buy trades of the book at places like Amazon, Things From Another World, or read it for free via Hoopla if you have a library card--seriously, free! Get on it people, you don't know what you're missing.
Posted by David Charles Bitterbaum at 5:10 PM