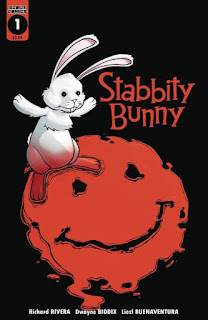 I posted not too long ago about how I was excited to win the contest from SCOUT Comics, Comics Heating Up, and the creative team behind, "Stabbity Bunny," to supply the name and breed of a dog that will appear in the comic (I look forward to seeing a Pug named Humphrey in the near future)! Therefore, when SCOUT reached-out to assorted bloggers and media outlets with an assortment of comics to review (I signed-up to get updates) I jumped at the chance to read the first two issues of the SCOUT editions of this formerly self-published series. Having now read the debut two installments I can say, "Stabbity Bunny," strikes just the right balance of being cute and gruesome enough that it comes off like a delightfully twisted children's story gone horribly wrong.

The comic focuses on Grace Lee, a young girl whose family is hinted to have a supernatural secret that makes them a target for dark forces. This results in the first issue being about Grace being kidnapped and almost killed before her plush bunny makes it clear he won't stand for anyone threatening his owner. The second issue fleshes out the plot a bit more and introduces a lot of the cast--I honestly worried it would lack the dark edge of the first issue until its end when some dark magic cast on an unsuspecting victim makes it clear Grace and Stabbity are still in plenty of danger. 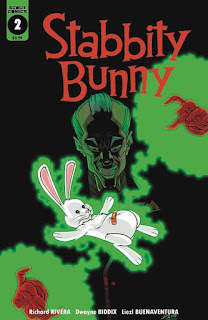 Richard Rivera's writing strikes the perfect balance of cute and funny mixed with morbid and gruesome. He can have a mellow scene where Grace and her friend enjoy a pleasant lunch and then seamlessly segue to all kinds of malevolent forces wreaking havoc. The first issue has a bit of a rhyming storybook theme that is almost a little grating as opposed to clever, but the second issue thankfully drops that. Illustrator Dwayne Biddix is also owed a great deal of credit for being able to make cute things look adorable--such as Stabbity--which makes it all the more shocking when the scene gets violent and bloody. Speaking of bloody,  colorist Liezl Buenaventura is superb with a mixture of bright happy colors offset by crimson red when Stabbity gets violent.

The creative team behind, "Stabbity Bunny," walks a dangerous tightrope with their mixture of childhood whimsy meeting with evil magic and brutal violence, yet they somehow manage to make it work perfectly and give us a comic I loved reading and am honored to have contributed to--even if it is in a way as minor as suggesting a dog's name and breed. I am excited to read future issues of, "Stabbity Bunny," and would encourage you to get in touch with your local comic-shop and have them order issues or pre-order copies for yourself at Things From Another World. I give these first two issues 5 out of 5 stars for sure!
Posted by David Charles Bitterbaum at 3:31 PM