Best Weird Comic I've Read in Awhile AKA The First Issue of "No.1 With a Bullet," 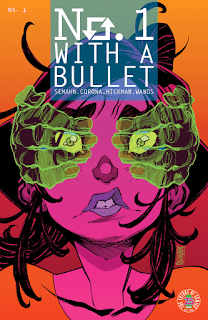 I of course love comics that are more, "Out-there," and weird. Now, if a comic can be weird and good that is just awesome. "No.1 With a Bullet," has grabbed my attention fully with its surreal first issue and heft dose of weirdness. This latest Image book imagines a near-ish future/alternate present that is basically our own world but warped just a little bit more. Technology has continued to expand and the latest hot thing are contacts clled iRis you can wear to record images or see alternate-reality images (like a video-game of sorts, but more twisted). As the back-matter of the comic discusses, this actually is a patent that already exists and is just another example of how we are having our privacy invaded further and further. The synopsis of this comic written by Jacob Semahn and illustrated by Jorge Corona almost sounds a little too straightforward considering how wildly odd the comic is:


Her social media, strong. Her variety show segments, a hit. Nash Huang is at the top of her game. But when the iRis Shutter contact lens hits the market, Nash’s life is personally invaded. The latest leap forward in “technological progress,” these contacts not only play video or augment reality…but also record footage. Fighting to keep her life together after a leaked sex tape goes viral, a clingy super-fan is the last thing on Nash’s mind…but that’s exactly when the bodies pile up and the terror begins. From the bestselling team that brought you GONERS, comes NO. 1 WITH A BULLET!

Seriously, that sounds vaguely interesting but not especially odd. However, Semahn's way of having almost everyone talk in off-putting tech-jargon and popular slang combined with Corona's art giving us exaggerated bodies and environments gives everything a slightly fun-house mirror feel of if we were staring in a reflection of our own lives gone just slightly wrong. The protagonist, Nash, is a young woman who works for a popular nightly television talk-show and loves technology until at the issue's conclusion (as the above promo-text describes) she finds a sex tape leaked. There are other nefarious things at play too as some mysterious suicides make clear.
The comic shows technology as something that is less of a tool than a constant invasion into our lives. Nash can barely pay attention to the movie, "Jaws," and cuddle with her girlfriend without constantly fiddling around on social media, friends talk about how someone who was well-respected found themselves fired and a social pariah for a slightly off-color joke they sent in an email leaking due to their being hacked. Everyone says how if we don't stuff getting out then don't put it on the web, but these new iRis Shutter contact lenses create a whole new problem of if we will even know whether something is getting recorded and put online.

"No. 1 With a Bullet," is off to stellar start and stands as another example of the kind of quality publications Image continues to release. The company is just releasing hit after hit thanks to having so many great new books and, "No. 1 With a Bullet," makes a glowing addition to that list of stupendous new titles. You can buy yourself a copy at Things From Another World or via MyComicShop and I would recommend you do as this book easily scores...
5 out of 5 stars.
Posted by David Charles Bitterbaum at 11:43 AM