I will at times shine a light on Kickstarter campaigns that catch my eye, and there are two new comic ones I felt like giving a shout-out. Both are coming-out from smaller comic-publishers and creators who otherwise would possibly be unable to publish the books, so I feel they could use our support!

The Eternal Thirst of Dracula 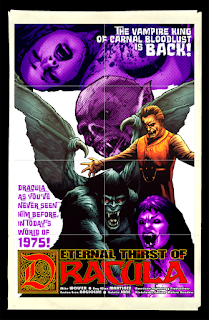 Mike Wolfer is a friend of the blog whom I've enjoyed interviewing a number of times and whose works I always enjoy reading.  He has a new project coming out from American Mythology titled, "The Eternal Thirst of Dracula," and it looks like a great grindhouse movie-esque read set in 1975 where some horror-movie producers discover that the supposedly fictional Dracula is oh-too-real. Wolfer is writing with Roy Allan Martinez providing art, Enrica Eren Angiolini doing colors, and (also friend of the blog) Natalie Jane is lettering. The Kickstarter has exclusive stuff that won't be in any comic-store releases and as always has a number of great pledge levels as low as $10 for a digital copy or more expensive for folk who want to get a ton of stuff. You can check out the Kickstarter here and I wish the creative team great success!

Space Goat Productions Inc. has a number of cool comics and broad games they produce, with, "Heronies," being one of those series. Written and drawn by Naifeh, I heard a variety of good things about this series which focuses on, "The tale of Marcy Madison, a bright, capable young woman just out of college, blessed with boundless optimism, a fresh perspective, and a nifty superpower--ready to make the world a better place. Marcy finds that most of the world is trapped in its own dysfunctional stories, mired in pessimism, and is more than ready to dismiss her. However, she’s determined to blaze her own trail, which soon proves dangerous." This collects the series so far in graphic-novel form  (a digest that Space Goat refers to as perfect for backpacks/"a backpack edition")and a digital copy can be had for only $10, with other higher levels coming with physical copies or personalized sketches by Naifeh. You can view the campaign at this link and I wish Naifeh and Space Goat all the best in reaching their goal!

Update: It seems Space Goat is having its own sexual harassment scandal, but it is unrelated to Naifeh so I still think the Kickstarter is worth giving attention!
Posted by David Charles Bitterbaum at 5:33 PM