I Decided to Investigate the Now Mostly-Hidden, Weird, and Really Stereotypical World of Cigarette Advertising 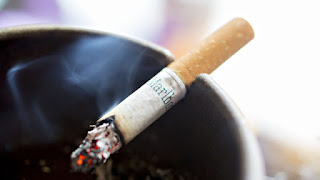 To begin with: I hate cigarettes. The smell makes me gag, the smoke makes my eyes hurt, and I promised my Grandmother who was a lifelong smoker and unable to quit I would never try it. To this day I've not had a cigarette in mouth and find them disgusting. I was wondering recently though, with all the laws that have basically made cigarette advertising mostly gone do they even have much of a P.R. budget for the United States? They haven't had cigarette promos on television in a long while, billboards are banned, and etc. Other countries are more lax about ads but America has shut it down...at least unless you go looking for it, then a whole weird secret world of cigarette culture opens-up.

When I was thinking about cigarette ads I remembered seeing during my youth two images immediately came to mind. There was Joe Camel and the Marlboro man. Joe Camel was a young hip cool Camel that maybe in retrospect was too young and cartoony, with enough people arguing he was designed purely to appeal to kids that he was eventually buried in graveyard of unwanted mascots between the Noid and whatever the fuck Spongmonkeys were.
While the real-life inspiration for the Marlboro man died of lung cancer, Marlboro has kept the imagery going to this day. I decided to visit their website and find out if people who clicked-through to willingly see cigarette promotions maybe would find a Marlboro website with a little banner ad featuring cowboys and some cigarette coupons. I mean, it couldn't be anything that interesting, right? As I said, dear God, did I discover a weird hidden world.

Internet Time
Visit the website of a cigarette company and due to U.S. laws you will have to prove your age through various verification methods that can go as far as providing the last four digits of your social security number. I didn't feel like doing that however and Marlboro allowed me to just answer other intrusive questions to create an account and get into their website. Once I did so I was taken to a website with a slick design that looks like a surreal mixture of a social network and lifestyle website all with a heavy emphasis on the supposedly smooth and delicious taste of a cancer stick. Also, a lot of stereotypes focused on manliness.

Once you're logged-in on Malboro's website you can watch fun videos about the wide-open wilderness, read about ranches, how saddles are made, and basically enmesh yourself in the life of the fictional cowboy that never really existed but we like to imagine did in our rosy view of American history. After indulging in the Wild West you can read about music, enter a contest to design your own neon sign for nightclubs, and use Marlboro's handy bar-finder tool to locate a drinking establishment that will also let you puff on all kinds of deadly chemicals whilst getting tipsy. Then you can follow a link to download a picture game featuring imagery of (what else?) cowboys, guys riding motorcycles, and other masculine imagery? Next, you can get some cooking recipes to help you, "Cook like a man," and grill-up some dude-food. After all that, share some comments and enjoy chatting with other smokers on the site while you bond over how, um, great smoking is?
Marlboro's website bleeds testosterone. It is going for that tough-guy image of saying, "Don't listen to the people who say you're lame and out-of-touch with a world that realizes smoking is terrible, you're a strong man who needs our inexplicably manly cigarette." Marlboro insists you're a man who doesn't trust any fancy scientists or government telling you how cigarettes are dangerous. You ride horses, listen to music, grill, and otherwise do things that actually have nothing to do with smoking but when a company associates them with cigarettes is able to make you think that cigarettes are the same as cool stuff like riding horses, listening to music, and grilling. That's the most insidious thing here, the idea that the act of smoking something as gross as a cigarette--but for the purposes of these ads it has to be a Marlboro cigarette-- somehow makes you cool and strong man.

I didn't think a cigarette company would put so much money and effort into a website you can only view with a lot of effort. Then I realized why they did. You see, the people who access these sites are willingly seeking this stuff out and in this advertising vacuum where cigarette companies can only, "Preach to the choir," they do so. It is getting harder and harder for big tobacco to gain new smokers so they need to do whatever they can told hold onto the current ones.
If this means stroking a smoker's ego by creating a false mental link between smoking a cigarette somehow being as rad as cooking a tasty BBQ chicken, riding a bull, or dancing at a club, then these companies will draw these false comparisons with gusto. This mostly-hidden and really stereotypical world of cigarette advertising geared toward keeping smokers in their grasp is uncomfortable and bizarre. After I first signed-up out of my aforementioned curiosity and saw all this I logged-out and mostly forgot about my idea to even write this piece. Then the packet came.

One Day a Packet Came
When I signed-up on the website I was told I'd be mailed a welcome packet, but that it could take a few weeks for it to come. About three weeks later I got a really fat all-black envelope from the Marlboro corporation. It wasn't even really an envelope though, it was more of a packet. I unsealed it to find it then folded out to reveal a bunch of glossy papers featuring much of the same imagery from online. The pictures of horses, cowboys, and wide-open plains looked inviting, with the irony of fresh clean wilderness air versus the dangers of smoking clearly ignored.

The other papers advising me to visit the site for more recipes to, "Cook like a man," made me again wonder what the Hell that phrase even meant. There were some coupons for taking a dollar off a pack of cigarettes or three dollars off a carton included as well. This packet did everything to make smoking look awesome and have you forget the fact that you are literally inhaling deadly smoke into your lungs. It would be impressive if it weren't so disturbing and false. I threw the packet in our recycling.

Just Plain Weird
I haven't joined any other cigarette websites as the surreal world of Marlboro was more than enough for me to explore with its alternate-reality view of our world where smoking is somehow a great hobby. I still find it just plain weird how much money Marlboro (and I assume the other companies) pump into this advertising that only will be viewed by people who currently smoke or oddballs like me wanting to investigate stuff. It is weird, but not mysterious, as if you want people to keep buying your product that literally kills them you need to offer as much reinforcement and encouragement as possible for them to keep smoking.

Perhaps as less and less new smokers pick-up the nasty habit and more and more long-time smokers work to quit then eventually these tobacco companies won't even have enough money to make advertisements that are as fancy as they are insular in the focus on being geared towards keeping smokers smoking. Perhaps big tobacco will someday become little tobacco with an increasingly shrinking amount of clients for their product, I certainly hope that does occur!
In the meantime, the companies will continue to make these promotional materials for their fans/victims in the hopes that all the talk of masculinity, freedom, and fun will help people ignore the fact that at the end of the day they are buying a product that is designed to shorten their lifespan and harm them. I guess we will see and in the meantime I'll continue to try to parse-out what it means to, "Cook like a man." I mean, is that when you kill the animal with your bare hands and then throw it on the fire pit or what?

Lastly, for anyone I know who smokes and wants to quit, Smokefree.gov is a great tool for finding resources and support. The last thing the cigarette companies want you to do is stop smoking, but that is the a great choice you can make for your health.
Posted by David Charles Bitterbaum at 7:02 PM