There is an HBO show I haven't gotten around to watching that sounded really interesting to me. No, please quit asking me about ,"Game of Thrones," because I ain't into it. I am instead talking about, "Westworld," which as far as I could see was pretty critically divisive. I was able to carve out some time before Thanksgiving however and watched the first season over about four days. Based on the book by Michael Crichton (and which has actually already had a movie made of it too), "Westworld," is about an amusement park full of robots (or, "Hosts,") who exist to give visitors to the park something to shoot, have sex with, or otherwise do whatever they want whilst having the Hosts unable to hurt them.

This all occurs in a setting of the American West in the Civil War-era and costs a ton of money to go visit. Throughout the season we have the focus set on certain guests and Hosts as the things of course start to go horribly wrong and the robots become self-aware and eager to strike-back at the humans who've been harming and forcing themselves on them for nearly 35 years. The season ends right as it looks like the Host rebellion will be kicking-off which is quite the cliffhanger considering this program wrapped season 1 in 2016 and will finally be back in 2018. 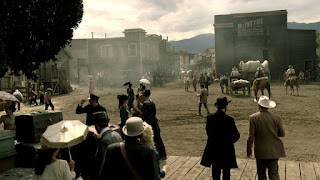 I would say there is easily five episodes worth of just smashing and awesome content...unfortunately this is spread-out across 10 episodes, resulting in a whole lot of filler. We witness a whole lot of seeing how the park operates, get an industrial espionage subplot that feels like it didn't really matter in the end, eventually realize we are witnessing multiple timelines, that certain, "People," are actually Hosts, and as you can see from what I've mentioned some of this sounds quite interesting and some sounds relentlessly dull. "Alternatively quite interesting and relentlessly dull," is actually a great way to describe this show. The little moments and big moments that grab a viewer's attention are stellar but spread-out over a lot of monotonous stuff.

I think, "Westworld," is a great show that somewhat annoyingly moves along at a really slow pace sometimes. What could have been a tightly-plotted half of a season leading into the 2nd half being full of exciting robot-rebellion action instead is one long first season full of lead-up. I am for sure interested in watching next season (whether I see it via a trial of HBO GO or wait a long time for it to come out on Blu-Ray and DVD) and would encourage anyone interested in science-fiction, robots, and the question of, "What makes us human?" to give it a viewing. Just be prepared for some parts to feel like a slog and others to be super-engaging.
4 out of 5 stars.
Posted by David Charles Bitterbaum at 11:20 AM