Two Great Comic Shops You Should Visit in Belleville, Illinois

I live in the Saint Louis region but right across the river is the state of Illinois. Over in that nearby region is Belleville, and within that town, there are two comic shops that are worth a visit! They are Bigfoot Comics and Collectibles & Cosmic Comics Games and Collectibles. In the past, I met people from both shops at different comic events in the area and thought I would share how their stores are great whether you live in Illinois or don't mind a drive across the river from Missouri. 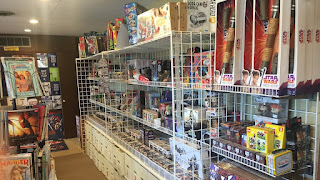 I'm friends with the owner of Bigfoot Comics and Collectibles, John Chaffee. I met him years ago through the ToyMan Show and have enjoyed visiting his store on a number of occasions. It is utterly packed to the brim with comics, toys, and other fantastic collectibles. I've heard some people who step into the shop describe it as, "Sensory overload," but in a good way. The store is full of older comics, newer comics, and tons of other cool stuff. Whether you're looking for cheap floppies to enjoy reading or rarer and high-end titles, Bigfoot Comics and Collectibles is a fantastic place to spend some hours digging for snazzy stuff.

I met the folks behind Cosmic Comics Games and Collectibles previously at a Quad Con. I told them I would try to get to their store and now I've been able to visit it! At CCGC they get in a variety of new titles that come out weekly and have a good assortment of back-issues to dig through. Their store also has vinyl records for sale--something which I appreciate as a music lover. If you're looking for the newest comic releases or other fun stuff, give them a visit at Cosmic Comics Games and Collectibles!