"The Quarry," is a Terrifyingly Fun Game 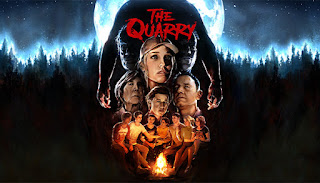 Way back in 2015 I played and reviewed, "Until Dawn." The developer, Supermassive Games, has their latest big release out now, "The Quarry," and I loved it. With a story that is a bit more focused than, "Until Dawn," and a good number of self-aware jokes about the horror genre, "The Quarry," is a lot of fun for horror fans or those who enjoy interactive dramas (with many possible outcomes). Focused on camp counselors who end up stuck at the camp for an extra night, things start to go horribly awry when it becomes apparent some kind of creatures are lurking in the forest, and they're hungry. The game takes its time getting to anything especially scary, however, instead easing us into getting to know everyone and slowly introducing gameplay mechanics that will later literally mean the difference between life or death.

Yes, the gameplay, my one quibble with all this. Much like, "Until Dawn," there are times you are basically watching the game and get dialogue prompts or choices you can make that drastically impact the story. I like these elements. There are also times you may have to move the joystick or hit the X button for a quick-time event as they are called. These are perfectly fine. Then, at some points, you are given control of a character and can wander around an area looking for items of note until you walk to the right spot to trigger more interactive-movie-style moments. These parts of the game are my least favorite. The characters feel kind of floaty and are not always the most responsive to the direction I'm trying to point them in. Then, I'll be walking along and the game's camera suddenly shifts to a whole new angle and I find myself struggling to point a character in the right direction to go where I want them to slowly amble towards It's a bit tedious, but I enjoyed so much of the game besides those times I had to wander around looking for points of interest that I can't whine too much.

"The Quarry," is an incredibly fun time and I was amazed how after I beat the game and Googled all the various possible ways the story can go for the differing characters. There is no, "Correct," ending in the game, but some endings are arguably happier than others when it comes to keeping everyone that you get to play as alive (or just intentionally messing up a bunch so everyone dies if you want that to happen as well). I played the game on my PS5 and the graphics were absolutely gorgeous, but it looks quite snazzy on older consoles as well, from what I've seen. Should you desire a good dose of horror or just want a solid story-focused game, "The Quarry," is worth the 7-10 hours it'll ask of your time to do at least one play-through.

Email ThisBlogThis!Share to TwitterShare to FacebookShare to Pinterest
Labels: PS5, rant-reviews, The Quarry, Until Dawn, video-games