Flashback Friday: The 90s Are Back With Wildstorm 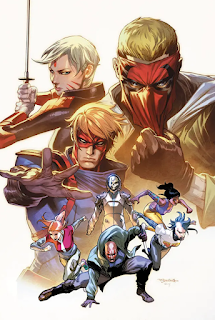 Wildstorm started up under Jim Lee in 1992 as a part of Image comics before it moved over to DC some years later (where Jim Lee became a powerful exec at DC) and it was its own imprint until a bunch of characters were folded into the main DC comic's universe. It was messy. That's beside the point, however, as it is the 30th anniversary now of Wildstorm beginning back in the day. Yes, the 90s were 30 years ago, let that set in. Anyways, DC is celebrating the line/characters' anniversary by doing some assorted special comics and variant covers.

There will be a, "Wildstorm 30th Anniversary Special," #1. A new, "WILDCATS," comic shall launch as well (set in the regular DC Universe, however). Plus, an out-of-continuity Black Label book about Amanda Waller of the Suicide Squad going against various Wildstorm characters is going to come out too, titled, "Waller VS Wildstorm." The 90s are back with vengeance and considered vintage/retro/a flashback. I'm going to go lay down and rest my back.