This Moon Knight Funko Statue is a New Favorite of Mine 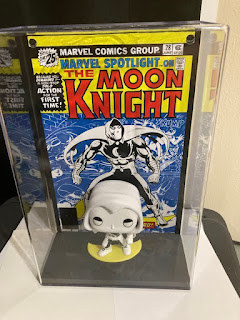 I don't collect a ton of Funko Pops these days, but I always seek out the snazzy Moon Knight ones. There have been these Funko Pops styled to look like they are standing in front of a popular comic that featured a specific character, and Funko/Marvel released a really cool one of my favorite heroes. As you can see above, it is Moon Knight as he appears in, "Marvel Spotlight," #28, his first starring appearance (before that he appeared in other comics such as, "Werewolf by Night," or within the, "Hulk," magazine, but did not get solo billing).

Unfortunately, you cannot take this Pop out of its little statue area without breaking anything (the case is actually a nice harder plastic), but it looks snazzy standing there in front of the artwork it ties in with. This Pop is now proudly displayed with some of my other favorite Moon Knight stuff and I'm happy to have acquired it!

Posted by David Charles Bitterbaum at 7:46 AM