I Got a Comic at the Dollar Tree That Ties-In With Their Toy Line--And it is Actually Fun! 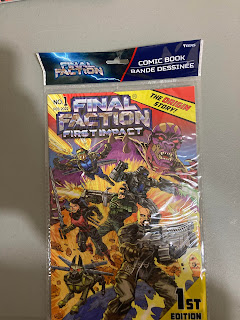 I was at the Dollar Tree with my wife and son browsing for various objects and noticed something interesting. There was a comic themed for the, "Final Faction," toys (and apparent animated series on YouTube). Titled, "Final Faction: First Impact," it involves the various soldiers who fight space aliens known as the Kharn. It's a bit like G.I. Joe mixed with Starship Troopers. You have troopers with various themes, creepy aliens, lots of accessories, and the whole thing is a little bit future-retro and tongue-in-cheek.

The plot of the comic centers on how in 2050 a comet strikes the moon. This reveals how long ago an alien race (the Kharn) were coming to Earth but got stuck in a form of space hibernation that resulted in a bunch of space debris forming around their massive ship--the moon was essentially a super dirty alien space ship, in other words. The First Faction is formed to fight the aliens and the comic climaxes in an epic battle within Death Valley. The Kharn are driven off (for now) but the back of the comic advertises how a second issue will be coming featuring a battle against the invaders within Costa Rica. It's good fun.

The script of the comic is by Tony Osborne, who has worked on a variety of movies, television shows, and now comics. The art is by Chris Marrinan, who is known for his work in the past with Eclipse, illustrating, "Wonder Woman," and being the artist on, "Captain America," some years back. These aren't just random people, they are actual folks with experience, and it shows in how the comic is actually really good. It has a fun vibe like you're reading a tie-in comic for an old kid's cartoon, and the vintage feel is clearly intended with some faux-ads (by Pete Mcdonnell) at the back of the comic for funny fake products. It is a throwback to as if you're reading some old floppy from the 1980s at your local drugstore.

"Final Faction: First Impact," cost me about $1.35 to purchase (the Dollar Tree raised prices due to inflation a bit ago) and was arguably more entertaining than some full-priced comics that are hitting the stands at comic shops. Hence, I give this 5 out of 5 stars. Plus, this is an ingenious way to promote the toys. You've got the Youtube cartoon, the comic, and now the toys, all at your local dollar tree for a price that will make parents shrug and go, "Fine, we can couple because they're cheap." You can watch the show and read up on the toys at the Dollar Tree website for, "Final Faction." Give it a chance, it's really fun.