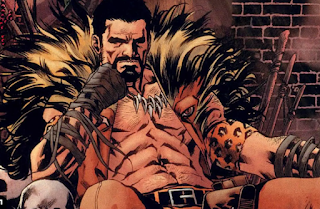 I've been wrong about movies before. I predicted, "Venom," would flop only to find it--and the sequel--did gangbusters at the box office. The, "Venom," movies were actually pretty solid too. Now, "Morbius," did get a lukewarm box office take, but the star (Jared Leto) has fans split between those who like him or hate him, and the movie apparently was just kind of meh (it spawned a lot of memes, though). Therefore, when I ask why we are getting a, "Kraven," movie I am perhaps being overly negative and it'll be a hit. That said, Kraven, really?

Kraven's whole gimmick is that he is a dude who likes to hunt stuff. I can only think of two good Kraven stories off the top of my head. "Kraven's Last Hunt," which resulted in him dying for a number of years after he thought he had, "Defeated," Spider-Man and proven himself the best hunter ever. Then, in the modern age we've got when he popped-up in, "The Unbeatable Squirrel Girl," almost more as a form of comedic relief than a villain. We are getting a Kraven movie though that may very well tie in a bit with, "Venom," and, "Morbius," as Sony seemingly attempts to set up a group of villains (they have the rights to) who will go up against Spider-Man at some point. Still, why a, "Kraven," movie? I guess I could also ask why we're getting an, "El Muerto," flick as well even though in the end the answer is, "Because Sony has these characters and wants to make money with them." Fair enough.