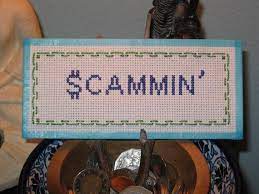 It's a grift that has been around forever but refuses to go away. Someone on Facebook contacts you and claims to work for the company. Then they say you won some mysterious lottery that entitles you to a bunch of money- and it isn't a scam, promise! It boggles my mind that people fall for this scam, but there are desperate and susceptible folks in the World. Hence, when a scammer tried to tell me I had somehow earned 600,000 in, "United State currency," as well as a truck, I decided I would waste their time in the hopes it saved someone else from being preyed upon by them.

It all began when a woman named Marie Linda messaged me. We had some mutual friends who worked in comic-books. I thought she perhaps was a comic creator who wanted to ask me to review something--an event that has occurred multiple times. I'll get folks messaging me through various means about their comic. No, however, she told me she actually worked for Facebook and I had apparently won a lottery. I immediately told her how excited I was and my plans for the money... 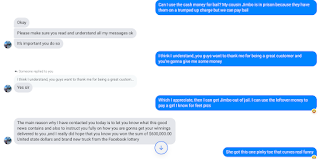 If you don't feel like clicking the image, I basically tell Marie how I'll use the money to bail my cousin, Jimbo, out of jail and then pay a girl I know for feet pictures. After Marie insisted I focus and pay attention, I apologized and asked if she wanted to see some memes. I proceeded to send her incredibly weird Veggie Tales pictures with bible quotes about death and Hell as well as a meme about how Snickers look like a veiny penis. I informed her I wanted to make money finding memes online like my friend Phil. I told her his full name was Phil Deez Nuts. Marie then sent the absolutely fakest pictures possible of stacks of money and a truck before I asked if I could have a car instead, at which point she said that was fine and sent pictures of a car that looked like they came from a Google search. Then things got weirder.

To prove how legitimate this lottery was Marie sent me a screenshot of an official FBI document signed by James Comey...who wasn't even working at the FBI when the lottery drawing supposedly happened a few months ago as Trump fired him, anyone who follows the news may recall. I didn't point this out, I just said how I didn't trust the FBI because they tried to shut down my goat farm. Here is the, "Official," letter in question: Wait, there's more! Apparently, Marie wanted to share with me pictures of winners holding up pieces of paper advertising all the money they won as well as a screenshot of a news story about a winner that totally looked authentic. She seriously sent me this: 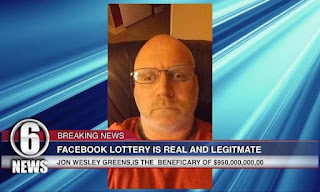 I don't know about you, but that really boosts my confidence in this whole thing being an authentic giveaway. I told Marie that I wanted more money and she should take some from other winners and give it to me. I was informed I should not be greedy and I apologized. I told Marie I was exhausted from working at a jar factory where I helped make jars but sometimes farted in them. I asked her not to tell anyone about that though. She responded with a laughing emoji but I was pretty sure her patience was wearing thin with me. At this point, she typed out and sent me a list of a whole bunch of personal information she needed to start the process of getting me paid (information Facebook would already have anyways). I told her I needed to make a sandwich that I would eat nude to feel closer to nature.

She stopped responding after this as I continued to type random gibberish such as asking if Mark Zuckerberg was actually a robot created by Bill Clinton. I closed our conversation by saying she must have figured out I was messing with her and that she should be ashamed of being a scammer. I blocked and reported her. It was an entertaining way to pass 15 minutes and I really do hope the time that, "Marie Linda," wasted with me helped keep someone else from being fooled. I mean, that or she really did want to give me $600,000 and I made a huge mistake. That official news story did say the lottery was, "Real and Legitimate," after all...