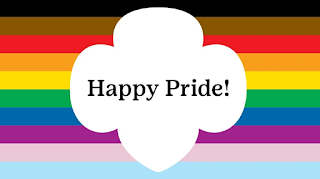 It is now June so I want to wish anyone who is LGBTQ+ or an ally a happy Pride Month! Some things people forget about Pride is that the first pride was literally a riot against police brutality when they demanded to do a, "Sex check," of Transwomen (Stonewall) and that corporations changing their logo to a rainbow for a month is an empty performative gesture. After all, LGBTQ+ people exist the 11 other months of the year and deserve the right to be acknowledged and exist. It both cracks me up and annoys me when ignorant people talk about, "The GAY agenda," because apparently wanting to be treated as a human being who can live and love in peace is an agenda. Happy pride month, let's keep fighting for the rights of our LGBTQ+ friends and family.

Posted by David Charles Bitterbaum at 9:34 AM