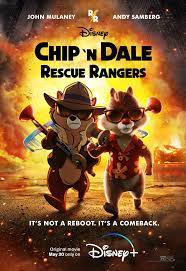 I wrote back in February that the trailer for the, "Chip and Dale: Rescue Rangers," movie actually looked really good. It was about a World like the one from, "Who Framed Roger Rabbit," where cartoons are real and live with humans. Chip and Dale had a show, it got canceled, and they went on to do different things with their life. However, cartoon characters are going missing, and when a friend seems to be kidnapped Chip and Dale have to reunite so they can work together again. It's an extremely meta and quite hilarious flick.

The mix of animation, live-action, claymation, CG, and everything else works together surprisingly well, the cameos and references don't feel forced but instead add to the plot, and some of the characters who appear and the jokes had me shocked Disney greenlit this as it really makes fun of a lot of stuff. John Mulaney and Andy Samberg voice Chip and Dale, respectively, but tons of other famous faces appear and voices are heard. It's a stacked cast and I was often chuckling or outright guffawing at the flick. There is plenty of heart in it too, which makes this a comedy where you actually care about the characters. I am pleased to say this is the rare, "Kids' Flick," that grown-ups can enjoy just as much as little ones, if not even more. Why Disney didn't release this in theaters first is beyond me, but you can watch, "Chip and Dale: Rescue Rangers," on Disney+ right now. I'd suggest you do so and thank me later.