I Had a Blast at the St. Louis Comic-Con Today!

The St. Louis Comic-Con runs through the weekend but I won't be able to attend tomorrow/Sunday, so I figured I'd write about all the fun I had today when I attended! I got there early in the morning and was pleased to see a variety of vendors--plenty selling comics, toys, and other cool stuff. I ran into my friend Larry of Bug's Comics and Games shortly after arriving at the show and picked up a cool, "Venom: Lethal Protector," variant cover from him. Check it out: 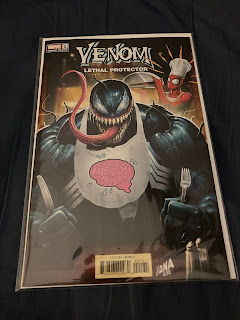 As I started walking around I visited the booth of Tango Comics. They make a variety of cool sci-fi, super-hero, and pulp-style comics in addition to promoting literacy for everyone younger to older. As I kept exploring I saw Big Dog Ink, a publisher whose work I've reviewed on previous occasions. They had a bunch of books for sale and discussed how they'd had great success with Kickstarter in regards to launching new titles. My chum, Bruce Reynolds was selling comics always is fun to speak with. I also met Edward Sims of Kensai Productions. I told him I remembered how I had bought a comic from him before on Etsy and discussed it on my blog. He was excited to hear this and I purchased the second issue of, "Rising Sun," as I'd read the first one previously. Here is a picture: 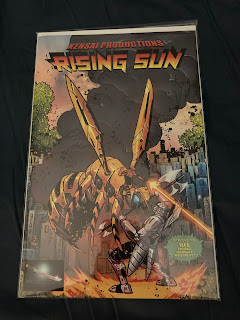 I continued exploring the show floor and I bought a tasty snack from Dave of House Family Homestead, some freeze-dried Skittles! We talked about the process of freeze-drying and how comic cons often loved his delicious items! I visited the booth of 1 More Round Entertainment and talked with them about their comic, "Evolusion," and how it was a blend of heroics and sci-fi in a World where things start evolving at an alarming rate and in wild ways. Chris, "ToyMan," McQuillen was at the con and I told him how I was eager for the upcoming ToyMan show on July 10th!  My friend and skilled comic creator Tom Nguyen was at the show as well, showcasing his awesome works. He was a joy to catch up with as I hadn't seen him in quite a while due to the pandemic. Here's a snapshot of him as well as a fun photo of us:

I had a lot of fun shopping the various booths at this year's St. Louis Comic-Con and chatting with the many creators showcasing their works. It was wonderful to have the Saint Louis Comic-Con back after a long (forced) break due to COVID-19 impacting the World what feels like forever ago. The show is still going on tomorrow so if you're in the area and able to attend I'd highly encourage you to do so!
Posted by David Charles Bitterbaum at 10:46 PM