"The Mighty," is Getting Republished by Image Comics! 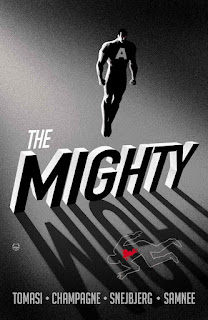 "The Mighty," was a maxi-series from Peter J. Tomasi, Keith Champagne, Chris Samnee, and Peter Snejbjerg. It was extremely underrated and a bit overshadowed by a comic with a slightly similar theme, "Irredeemable." This series imagined a world with a single superpowered being--no others--who was secretly quite evil. Named Alpha One, the series followed a police captain named Gabriel Cole who uncovered a whole lot of stuff about Alpha One and had to stop him. Yes, it was to some degree a, "What if Superman were evil?" styled story, but it was actually fantastic and had a really satisfying ending (I know opinions are split on, "Irredeemable," and its conclusion). "The Mighty," has been out of print for years, however, until now.

Image will be reprinting, "The Mighty," in its entirety along with some hard-to-find eight-page stories, behind-the-scenes sketches, and more. I got a press email from Image announcing this new edition in the morning and it woke me up more than coffee as it got me so excited! Tell your favorite location to order you a copy and expect to see, "The Mighty," on September 28th (in comic-book shops) and October 4th (in bookstores). I'm pumped for it!

Posted by David Charles Bitterbaum at 11:26 AM