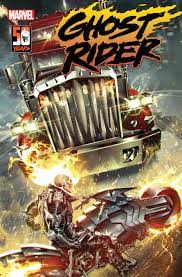 I've been reading the new, "Ghost Rider," comic from Marvel and if I may say, it is shockingly dark and gruesome for a mainstream comic. Considering this doesn't have the (mostly defunct) MAX label you get a lot of horrifying content and some shocking gore in a, "Hero," comic. I ain't mad about it though.

Written by Benjamine Percy with art by Cory Smith, the series kicked off with Johnny Blaze living in a seemingly perfect town, his memories a bit of a mess after a nasty motorcycle accident. It was revealed to be a secret Hellscape that was keeping him contained and he broke out so that he could start hunting down the demons causing a mess in the World while he was distracted--and he wants to figure out who tricked him too. The second issue involved a hotel run by a man who was killing people to feed to a demon and the third issue just came out this week. It involves a highway with a demon truck of sorts causing all kinds of death and destruction. It's been good stuff. 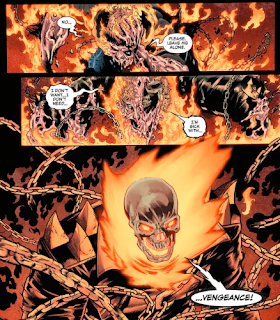 This run of, "Ghost Rider," leans heavily into viewing the Ghost Rider as a terrifying force that destroys anything it feels deserves vengeance--Blaze outright refers to it as a weapon in the third issue that he only can hope is pointed in the correct direction. It sounds a little like the Hulk, but the Ghost Rider isn't a rage monster, it is a fiery source of power that judges and dispenses justice without mercy. Percy gives each of the three issues so far a stark degree of dread and terror with Smith's artwork being grotesque in the best way possible. Johnny Blaze doesn't so much transform into the Ghost Rider in this series so much as he melts or rips off his flesh to reveal the Ghost Rider burning its way out. Again, how this managed to make it past Marvel's editorial team in an era where they hesitate to do anything too edgy astounds me, but I like it. There are some other subplots with the FBI apparently trying to track down the Ghost Rider and a team of magic-users possibly helping Blaze, but for me, the main draw is seeing the Ghost Rider just be plain scary.

The current, "Ghost Rider," run only has three issues out so far but I'm quite impressed with what Benjamin Percy and Cory Smith have given us so far. The amount of horror content they've injected into the series is surprising but I definitely appreciate it. Should you like your superhero comics with more of a monstrous bent then you ought to check this current, "Ghost Rider," out.