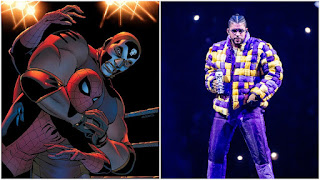 Sony owns the rights to characters that relate to Spider-Man. They've shared with Disney/Marvel so that everyone at both companies can cheer as money falls from the ceiling as if it were a game show. Seriously, the last Spidey flick was especially bonkers in how much it made. However, Sony does have its own flicks that can essentially acknowledge Spider-Man but not always the MCU, maybe? There might be a separate Universe? It is still unclear exactly how the rules work, but Sony is doing its own thing too with stuff like Venom, Morbius, a Kraven movie incoming, Madame Web, and now...El Muerto?

Yes, El Muerto is a character who appeared in a couple of, "Friendly Neighborhood Spider-Man," comics some years ago...then was never heard from again. He's going to be in a movie with musician Bad Bunny playing him. This was announced at the same time Sony mentioned the no-brainer of, "Venom III." People went from saying, "Of course!" to even those who know deep-cut characters that have interacted with Spider-Man scratching their heads and saying, "Huh?" I thought making a Madame Web movie was digging heavily into a list of Spidey's friends & foes, but this is as deep a dive as there ever was. If the movie will be good I don't mind by any means how random a character is getting a film, however. I'll just take some quality entertainment.