Film Friday: The Unbearable Weight of Massive Talent is a Stupendously Good Time 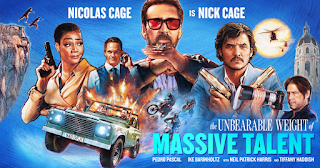 I was able to catch a showing of Nicholas Cage's latest movie, "The Unbearable Weight of Massive Talent." It stars Nick Cage as, well, Nick Cage. He plays a (slightly) exaggerated version of himself who is equally eager to work and exhausted with Hollywood. As the trailer for the film shows, to pay off some debt he goes to the birthday party of an eccentric rich guy who loves Cage's work and supposedly has made a fortune in agriculture but might be hiding some secrets. Pedro Pascal plays this fellow and is an absolute hoot. Pascal and Cage just being zany and off the wall is the main draw of this film and they deliver the goods.

Watching Nicholas Cage poke fun at himself in such a self-aware manner while also actually making a convincing argument for himself as deserving of a little more respect as an actor gives the whole movie a surreal metafictional air. How much is drawn from real life and how much is exaggerated, one is left to wonder? Plus, it helps that this film is hilarious. Everyone in the supporting cast is terrific from Neil Patrick Harris as Cage's agent to Sharon Horgan as Cage's latest ex-wife and Lily Sheen as Cage's very annoyed teenage daughter. Plus, we get Ike Barinholtz and Tiffany Haddish as CIA agents who riff off of each other deliciously. At just over an hour and a half, "The Unbearable Weight of Massive Talent," is the perfect length, never wearing out its welcome but instead leaving us wanting more. This is definitely worth watching.