"The Lions of Leningrad," Offers a Gripping WWII Story 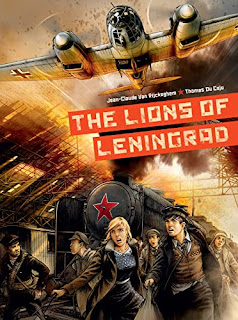 I was able to read a review copy of, "The Lions of Leningrad," thanks to being on the press list with the publisher, the Dead Reckoning imprint of the U.S. Naval Institute (a non-profit that puts out fascinating books). Written by Jean-Claude van Rijckeghem with art by Thomas Du Caju, this was a fantastic read. The book takes place primarily in then-Leningrad (now Saint Petersburg)," and after starting up in 1962 to set up a mystery, flashes back mainly to the early 1940's so as to follow the lives of a group of teenagers in Soviet Russia. The book chronicles their lives as they face threats from the outside in the form of German planes bombing them as well as interior threats from a vicious and corrupt Soviet party.

"The Lions of Leningrad," is an engaging read with all the leads being likable (at least at first) and readers really start to care about these teens as they struggle with the general challenges of growing up along with simply trying to survive in a war-torn city where everything including food is a scarce commodity. Caju's artwork is fantastic, with scenes of fiery explosions igniting the page and the period-era cars, clothes, and vehicles looking like true-to-life replicas. Between the intriguing story and superb artwork, this is a great book. I would recommend, "The Lions of Leningrad," to anyone who enjoys historical fiction, great comic-book art, or who just wants to read a great story!