The First Issue of the New, "Heroes Reborn," Shows Promise 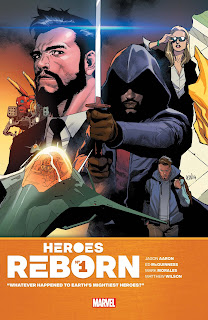 A bit ago Marvel announced they were doing a new, "Heroes Reborn," event. Unlike the one in the 1990s that featured an alternate Earth, this one had it apparently be the regular reality but rewritten where the Avengers never formed and that altered a lot of history--resulting in the Squadron Supreme being the big-name team. It sounded like a fun mini-event, but a big chunk of tie-ins were announced. That made it sound possibly a bit bloated for a weekly thing. Still, I tried the first issue and I thought it showed some promise. The idea is that the Avengers never formed for some mysterious reason and it seems like only Blade realizes that the World is wrong. Agent Coulson is President and seems to maybe be evil, supposedly Mephisto is involved in all this I read, and there is a lot going on in this different-but-vaguely-familiar World. There is still a Hulk, but he's locked up, Dr. Doom lost his political power and becomes the Juggernaut. Captain America was never found after he crashed into the ocean during World War II, and so forth.

I am a big fan of alternate-reality stories and have a soft spot for the Marvel version of the Justice League known as the Squadron Supreme so that maybe helped me enjoy this odd first issue. Written by Jason Aaron with lovely art by Ed McGuinness, this first issue is dedicated to basically laying out how things are all warped and that Blade isn't pleased by it. Not a ton happens beyond Blade saying, "This is wrong, this is wrong, that's wrong too!" but it is still fun to witness our Marvel heroes all changed about. McGuinness really does a fantastic job illustrating certain scenes, such as when the Juggernaut-powered Dr. Doom fights Hyperion or when some speedsters (one being a clever amalgamation of Scarlet Witch and Quicksilver) fight. It looks good even if not a lot happens beyond place-setting. 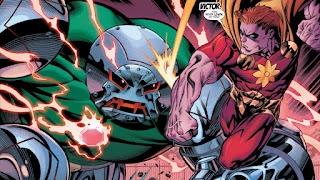 I suppose the tie-ins are kind of necessary to help flesh out this strange World whilst the main weekly comic will focus on Blade and anyone he can recruit to his cause of fixing the World. The second main issue and the first of the tie-in issues will be released tomorrow. I may give them a browse as this first issue had me cautiously optimistic about, "Heroes Reborn." It could all fall apart and suck by the end, but right now it's a fun alternate-reality jaunt.