"Dead Dog's Bite," Has Been a Great Comic 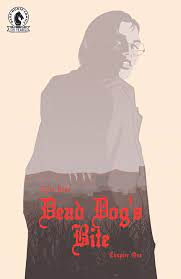 "Dead Dog's Bite," is a comic published by Dark Horse about a strange small town where a girl named Mac Guffin (note the clever name) has gone missing for a while. Her best friend, Josephine/"Joe," Bradley refuses to give up trying to figure out what happened and she'll have to put up with a very odd and quirky town in the hopes of figuring out what's going on. The book hasn't been getting a ton of buzz and I don't know why because it is amazing It's halfway done as it is going to be a four-issue mini-series and while there hasn't been a lot of talk, I did enjoy this article by Tom Murphy where he expresses how much he likes the series too.

"Dead Dog's Bite," is by Tyler Boss. Literally, it is entirely by him. He wrote it, drew it, colored it, lettered it, everything. He did so much for this comic I wouldn't be surprised if he was at the printing press overseeing as it was manufactured and the pages were stapled together. The mixture of humor, off-kilter tone, and the strange mystery of what happened to Mac makes for a damn fine read. I can't wait for issue #3 to come out this Wednesday and it'll probably be one of the first comics I read in my stack once I grab a copy. Read this book, now!

Posted by David Charles Bitterbaum at 11:01 AM