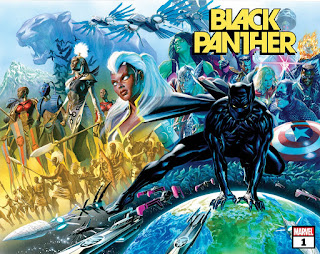 John Ridley is an immensely talented screenwriter and director. He also writes some damn fine comics from the older series, "The American Way," to his current work on, "The Other History of the DC Universe," and writing a futuristic version of Batman too. This August, Ridley will be teaming up with artist Juann Cabal  (and Alex Ross doing covers) for a run on, "Black Panther," as reported by the New York Times. I'm generally a fan of anything Ridley writes, and Cabal is a skilled creator so I'm pretty eager to read this.

Ridley describes what he's working on as “...a hybrid espionage-superhero thriller, but at its core, it’s a love story, and I don’t mean just romantic love, although there’s some of that as well. It’s love between friends.” Espionage? Thrills? Various kinds of love? I'm in! The first issue of this new, "Black Panther," run will apparently debut in August as the current run by Ta-Nehisi Coates is concluding. I look forward to reading Ridley's run and if it is anywhere near as good as the other stuff he's written we are in for a treat.