The Republican Party Seems to be Eating Itself Alive 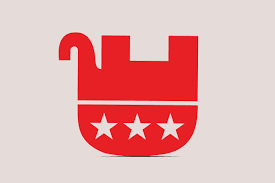 The Republican party of late had an uneasy truce between two groups. There were the old-school Republicans who to their credit would sometimes work with Democrats and often held views I disagreed with but could be moderate enough they were usually not awful. Folks like John Boehner, or the Republican who represented my district for a time when I lived in New York, Richard Hanna--the first Republican who actually said he wouldn't vote for Trump in the 2016 election. Then there was the more extreme far-right element that seemed to always exist but really emerged out of the shadows around 2008 when you saw folk like Sarah Palin gaining power and even being given a VP nomination by another old school Republican who had his moments, John McCain (McCain later admitted deep regret choosing her and she was told to stay away from his funeral).

After that the, "Tea Party," and so forth elements clawed more and more into the public consciousness with their xenophobia and extremism. It all came to head with the election of Donald Trump to the presidency in 2016--a terrible time for sure. The moderate Republicans I named either all retired or have died and the few left found themselves stuck with Trump, refusing to actually stand up for what's right and making them as bad as the extremists in my opinion. One wondered if when Trump was gone they'd wrangle some control back and maybe at least apologize for trying to destroy democracy. 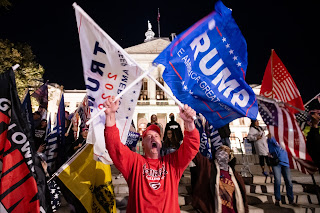 Donald Trump lost the election in 2020. What's left of the more moderate Republicans has been trying to come to terms with this and move forward with a Nation that clearly offered a rebuke to Trump and his hateful politics. The huge amount of extreme and terrible Republicans refuse to admit Trump lost fair and square, keep trying to rewrite election laws to make it harder to vote in the hopes that cheating others out of voting will assist them in winning, and otherwise are terrible. Now the party is eating itself alive as people such as Liz Cheney--the House Republican Conference Chair and the third-highest position in the House Republican leadership--finds herself labeled an enemy of the party for...admitting Donald Trump lost and wanting to impeach him for his crimes against democracy during that time he goaded his followers into literally attacking the Capitol (not that I'm saying Liz Cheney or the Presidential Administration of Bush and her Dad are innocent because they aren't at all). The Republican party may very well schism into two parties or find itself becoming more and more extreme until moderate Republicans end up becoming somewhat unwilling Democrats who hope they can morph that party a bit more to reflect their views than the ungodly monster their party has now become.

America is horrifically divided and even within our own political parties, there is division. It's just that Democrats have smaller quibbles compared to Republicans who either accept reality or live in a fantasy World where Trump won the 2020 election. I don't know what the future holds for the Republican party, but as it seems to be getting more extreme and alt-right I can only imagine any vaguely moderate Republicans will find themselves retiring soon and then writing books about how much they hate what their party has become (the aforementioned Boehner did that) or pushed out. We shall see. 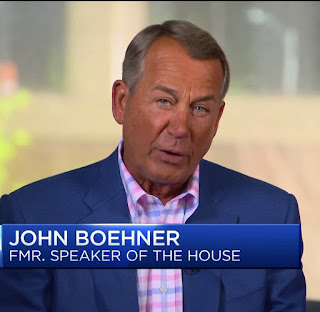 To close with a fun random aside, I actually met John Boehner once. When I lived in Cortland, NY, I would volunteer at the political office for whoever was our state Representative to get community service hours we needed for high school, college, Americorps, etc. Sometimes it was a Democrat in power and sometimes a moderate Republican. When Boehner came out to help garner support for one Republican I chatted with him and saw him speak. He is a pretty likable guy even if I disagree with him on a chunk of issues and his skin is as surreally tan and leathery as it looks on television. The man must spend 18 hours a day in a tanning bed.