"Heroineburgh," is a Fun Comic AND Live Action Web Series

Creators of indie comics will sometimes reach out to me and ask me to check out their works. I was intrigued when, "Heroineburgh," contacted me as they weren't only a comic, but also a long-running web series. They found me when I was trending on comics-twitter due to certain posts I'd made on a subject I have now said I'm done discussing. They didn't care about that controversy, they just saw I was trending, read my blog, and noticed when reading my site how I often wrote about cool indie comics. Therefore, they told me about their comic and show then asked if I was interested in learning more. I thought such a thing made a lot of sense as with so many big-name superhero characters getting shows and movies it sounded pretty smart for indie creators to do a similar brand synergy of, "If you like the comic, check out the show (and vice-versa)." I read the first two issues of, "Heroineburgh," and watched some of the latest episodes of the show. I will say I enjoyed both!

The plot of, "Heroineburgh," is that the city of Pittsburgh (where the comic takes place and the show is filmed) had a mysterious meteor explode overhead one night and it bestowed a number of people (mostly those with XX chromosomes) with superpowers. Now, many superheroines are officially recognized by the city as being a public safety force. There are a number of women who have become criminals with their powers and that has resulted in trouble at points. The two issues of the comic that have been released so far all follow different heroines who also appear in the show. The issues tell different fun stories about the diverse cast. I especially liked a story in the first issue which features a genetically modified lizard turning into a Kaiju that the cleverly-named, "X-Machina," fights. What makes all this even more fun is then seeing the characters from the comics come alive on your screen. 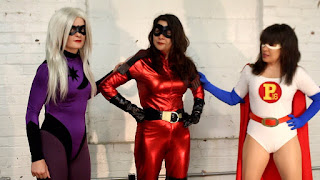 The, "Heroineburgh," web series is currently in its second season with 19 episodes total. Some episodes are split into two parts, but whether a full episode or a, "Part," they generally are a bit less or more than 30 minutes. The shows are fun and while not by any means high-budget, do have enough funds put into them that they manage some charming special effects--the costuming is always on point too. The acting tends to be pretty good and the whole show just has a nice fun vibe. Watching it reminded me of the shot-on-video (SOV) horror movies of years past not because things were by any means scary, but because back in the day people would get together with a cool idea, film it, and get it released as a VHS tape that sometimes became a cult hit movie.

Now we have the internet so instead of SOV we're doing things digitally, but that has allowed even more people to take their ideas and create fun shows. "Heroineburgh," has the same, "We're going to try a bunch of stuff and see what works and what doesn't and we're gonna enjoy ourselves along with way," feeling as SOV movies from the past did and I think that is a major element of why I found it so fun. It is incredibly enthusiastic and eager to share its stories with us via a mixture of seriousness and just the right dose of self-awareness. Another thing that a viewer can appreciate about, "Heroineburgh," is that unlike basically any other hero movies or television shows, there are a ton of female heroes. 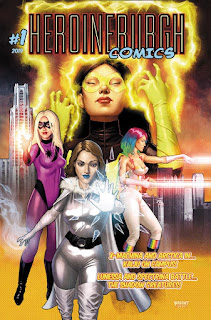 If I may complain a bit, Marvel took more than 10 films to give a female lead-billing ("Captain Marvel,") and DC has been good to, "Wonder Woman," and gave us a movie with Harley Quinn, but female-led properties seem to be the exception rather than a regular thing with some of the big properties these past years. Marvel will be debuting their second female-led movie with, "Black Widow," this Summer, even though they already kind of did her dirty with the way the character was treated in, "Endgame," in my opinion, but I digress. My point is outside of team movies that at least include a female or two and some of the superhero television shows there isn't much with female characters--especially female characters of color, various religions, gay/bi characters, etc.

To much credit of, "Heroineburgh," it is focused on diverse female characters in a way that doesn't seem like it's fishing for compliments for being progressive, it simply has a story to tell that involves a lot of superpowered females and it tells it well. Whether they're dealing with corrupt police mad that funding has been cut due to the superheroines becoming an official branch of the Government, fighting evil business tycoons out to make them look bad, or combatting super-villains, there is a big focus on women. 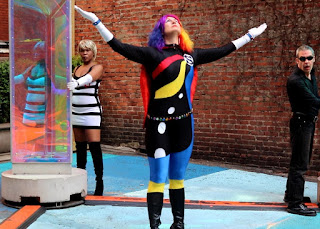 Yes, it isn't giving us over-the-top special effects that cost millions of dollars, but it's fun and earnest. You can see everyone making it had just as much fun making an episode as we do when we watch it. Plus, thanks to there being so many heroines featured in different episodes you can basically watch any episode from the first or second season and not be lost or confused as you might be if you tried to watch a later episode of a hero show on the CW or Disney+ (I mean, I don't know who would watch, "Wandavision," without having watched at least some Marvel movies, but if they did they'd be confused).

I feel like I've rambled a bit in this post, but the summary of all this is that I found, "Heroineburgh," to be a very enjoyable comic and fun web series that succeeds thanks to how charming and genuine it is. While it was stressful when I angered certain parts of the internet expressing my opinions, I was happy to see it got me trending and it helped even more folks discover my blog and reach out about their own works. I always love hearing from indie creators and thank Heroineburgh for getting me into their show and comic! You can buy the comics and episodes of the web series on their site, and I'd encourage you to check them out!

5 out of 5 stars for the comic and show.

Note: Issue one and two of, "Heroineburgh," as well as episodes 17 and 18 of the show were provided to me for the purpose of review; you all know the drill by now about me getting press copies of stuff, but I always like to make sure I mention it somewhere.