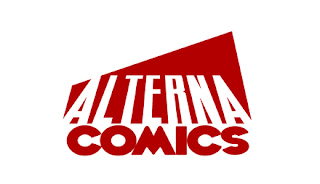 I've written about how awful Comicsgate is. Comicsgate is a, "Movement," that is mostly gone, but pieces of it still kick around being hateful and awful. It basically is an attempt to make comics, "Good again," in the sense there are no politics (well, liberal politics), no inclusivity, and it imagines an era of comics that never existed. Comic books have always been political, had an agenda, and so forth. Comicsgate members often harass and insult others, doxx innocent comic creators, and otherwise are awful. Apparently, the publisher of Alterna, Peter Simeti, is close with Comicsgate and people who have done a lot with the, "Organization," such as Ethan Van Sciver. That is not good.

I basically thought Alterna was just a fun indie publisher who sometimes reached out to me so I could review their works. I didn't really follow their social media, but when Peter would email me about their stuff to review in the past I would. I followed him on Twitter a bit ago and saw odd little things that gave me pause, but nothing outright supporting Comicsgate. Then this Twitter exchange happened: 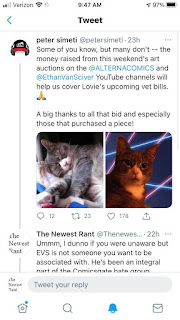 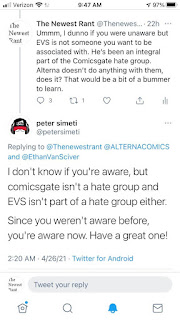 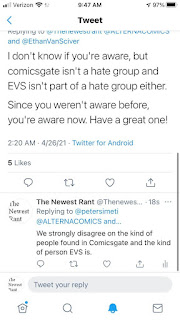 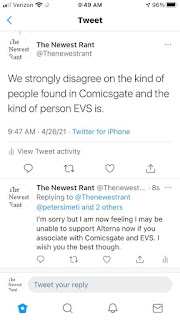 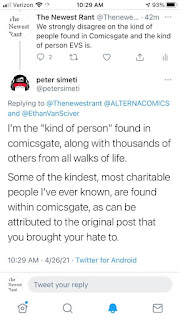 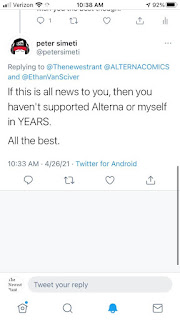 I wasn't going to argue with him on his Twitter page as that is his own little place. I just told him I couldn't support him anymore. He called me hateful, which is ironic. We're on my blog now, though, so this is my house and you know full damn well I'm going to drop some knowledge. Comicsgate is unquestionably a hate group, Ethan Van Sciver is a huge garbage person, and I will never, ever support Alterna again having seen this full-throated endorsement of Comicsgate from them. I don't know how Peter became so misled as to want to have his, "Fans," be members of a hate group, but that's his choice. My choice is to never support Alterna ever again with my dollars or ever review any of their works if they reach out to beg for some exposure for their books. I don't support hate.