Colton Underwood from, "The Bachelor," Has Come Out as Gay 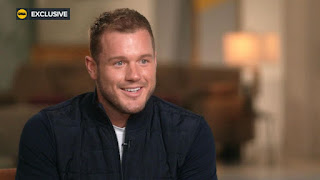 I have been extremely critical of Colton Underwood in the past and didn't like his term as, "The Bachelor," very much. I also expressed concern when it came to light that after he and the woman he chose on, "The Bachelor," Cassie Randolph, broke up, he began stalking her to the point she took out a restraining order against him (it was later dropped). All of that said, I only want to offer my support towards him for having the strength and courage to come out as gay. He gave an interview to, "Good Morning America," where he said he wanted to speak his truth, and he did so.

He attributed a lot of his past behavior to trying to deny who he was and, "Hating," himself. He admitted to dealing with dark thoughts and even contemplating suicide. Now, sharing he's gay doesn't excuse bad behavior towards others such as Cassie, but it does put a lot in context. To his credit, Colton said on GMA he wanted to specifically apologize to her for, "Any pain and emotional stress," she had during their time together and after breaking up. I am happy that Colton is willing to live as his true self and congratulate him on being open and honest about it. Plus, straight or gay he will always reliably be a media whore as in the very same day he came out (today) it was announced he'll be doing a reality show for Netflix about being out of the closet. No matter who we love sexually, it seems we all love the dollar equally.