Moon Knight is Indeed Getting a New Comic! 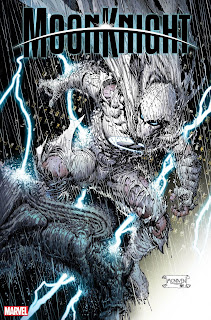 After reading some rumors I had my hopes up we were getting a Moon Knight comic. It has confirmed by Marvel that starting in July a new solo title is indeed starting up for the character! It'll somewhat acknowledge the really iffy Avengers arc Moon Knight recently appeared in but be its own cool thing with Marc Spector being a street-level hero as he normally is as opposed to how in that recent Avengers arc he channeled the Phoenix space-force briefly. It was weird.

The new, "Moon Knight," comic will have Jed Mackay writing (he's been good on other books I've read such as, "Black Cat,") and Alessandro Cappuccio doing the artwork (he's done some assorted comics like, "Power Rangers," and this is his Marvel debut). I'm excited and hopeful that this is a great run with the character!