Back Dave Ebersole and Vinnie Rico's New Kickstarter for the Comic, "Tommy Dakota!"

Dave Ebersole is a friend of the blog who wrote the comic, "Dash," which I thought was stellar--I was actually blurbed on the back cover when it was collected. He's worked a lot with artist Vinnie Rico and now they have a Kickstarter campaign for a brand-new comic! Titled, "Tommy Dakota and the Shootout at the Burgundy Ten," it is described in the Kickstarter listing as a, "Queer Western Romance."

It's a 70-page original graphic novel about, "An infamous robber meeting the love of his life on his final heist." Tommy is the robber and Jep Walker is a bartender who falls in love with the troublemaking Tommy--complications abound to make things interesting, of course. You can pledge for a digital or physical copy and the comic actually has a theme song you can get the audio file of sung by, "Songwriter/ punk rock piano player Mike Maimone." The song is an exclusive feature of the campaign and as someone who has always been intrigued by comics combining with music, I find it really fascinating this comic has incorporated a tune! 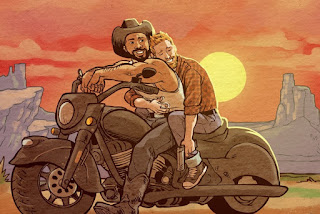 I encourage you to check out the Kickstarter for, "Tommy Dakota," at this link and back it if it sounds appealing to you. I know with how stellar a writer Dave is and with the art skills of Vinnie Rico, it is bound to be stellar.