"Jimmy's Vendetta: Part One," Kicks-off a Supernatural Thriller With Style 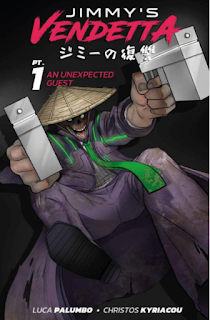 Blue Fox Publishing will be launching a Kickstarter in late May or early June for their new comic, "Jimmy's Vendetta: Part One." I look forward to the campaign to help get it published as I quite enjoyed the first issue I was provided with a digital review copy of! It is written by Luca Palumbo with art by Christos Kyriacou and they make a phenomenal team.

The story centers on a mafia in the near future (2189) that suddenly finds itself losing members to a mysterious killer. That killer is in fact a former mobster named Jimmy who was killed by his own crew and has returned from the dead. Jimmy only vaguely remembers the faces of those who killed him and has no clue why he was killed or for what reason he's even back. What Jimmy does know is he wants revenge. 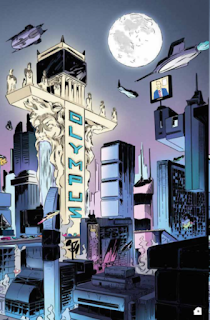 I really enjoyed, "Jimmy's Vendetta: Part One," with the futuristic setting being one aspect I loved as someone who adores sci-fi settings. Kyriacou's art expertly imparts the vibe of this city with its mixture of glitz and gutters, plus when Jimmy's half-alive corpse shows up it looks perfectly grotesque and terrifying. This isn't a man who has been brought back to life fully, he's a shambling pile of bones and flesh and looks it! Palumbo's writing gets across that the people Jimmy is hunting down are by no means good people, but also is careful to show Jimmy isn't a saint either.

A lot of questions are raised as to why Jimmy may be back and whom it may benefit, but as this is the first issue its main focus is setting everything up and getting the story moving, which it does fantastically. I'd encourage you to check out the other works of Blue Fox Publishing on their site and keep an eye out in the meantime for when the Kickstarter campaign launches for, "Jimmy's Vendetta: Part One."