When, "The Bachelor," Leads to an Abusive Relationship and Stalking 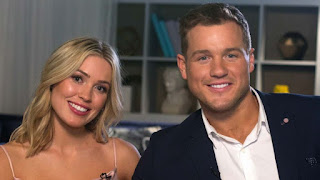 I write extensively about my love-hate relationship with, 'The Bachelor," and, "The Bachelorette," extensively. The show is often a hot trash fire, but like a 20-piece box of spicy Chicken McNuggets, I can't stop indulging. One thing we often forget about these shows, however, is the lives of the folk on it continue after the program. Sometimes happily, with some marriages and kids coming out of these shows, but sometimes things take a darker turn.

Colton Underwood's season of, "The Bachelor," was one of the more unpleasant ones. He was obsessed early on with Cassie Randolph despite her clear disinterest in him. He basically dropped any pretense of picking from a group of women and went right to relentlessly pursuing her in a way that came off as aggressive and toxic. She said no, and he didn't take no for an answer. She relented, they tried dating, it lasted less than a year, and it ended. That's it, right?

Nope, she had to take out a restraining order, he would stalk her, he placed a tracking device on their car, it's been bad. As this article by Maria Sherman observes about all this, if you know what's happening now it frames those episodes of, "The Bachelor," quite differently. No longer is it a fairytale of a man convincing a poor confused lady she loves him, it is just a dude gaslighting a woman into thinking they should have a relationship and getting abusive once she realizes that no, she wants to stop being miserable.

There is no way the people behind, "The Bachelor," could have known things would get so twisted, so I'm not blaming them, directly. The show does try to create a fairy-tale sheen for everything, however, and sometimes things are more akin to the classic Brother's Grimm tales of messed-up people whose motives are kinda twisted. I truly hope Cassie can be left alone as she desires and Colton finds the help he clearly needs to stop his abusive behavior.  In the meantime, "The Bachelor/Bachelorette," will probably keep on keeping on with its themes and formula, for better or sometimes much worse.